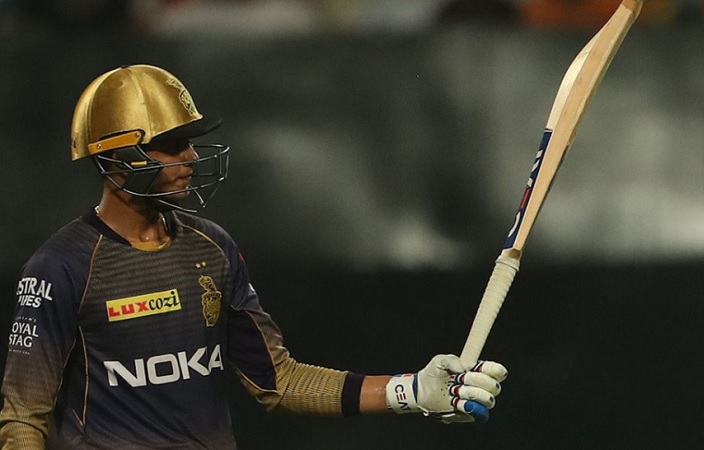 For DC, Kagiso Rabada (2/42) was expensive but picked up two wickets while Chris Morris (2/38) and Keemo Paul (2/46) also chipped in as team advisor Sourav Ganguly watched from the dugout as a 'visitor' in his own den.

Russell came in to bat when KKR were 93/3 after 12.4 overs, needing to up the ante. Soon compatriot Carlos Brathwaite joined him at the crease, and the big-hitting pair combined for a 19-ball 39-run stand for the sixth wicket in which Brathwaite's contribution was just 6.

Russell hit Rabada for a four and six in the 16th over and then took him apart in the 18th, smashing two maximums as the South Africa pace ace leaked 16 runs.

Morris got the better of Russell with a full toss outside off which the Caribbean all-rounder hit straight down Rabada's throat at third-man.

Paul was given the last over in which he got the wicket of Carlos Brathwaite (6), giving away 10 runs.

Opener Gill, who never got to bat up the order for KKR earlier, made the most of the opportunity by playing some delectable shots en route his first fifty of the season.

KKR lost debutant Joe Denly in the very first ball of the innings with Ishant Sharma sending the Englishman's off-stump cartwheeling with a full length delivery that jagged back from just outside the off stump. It was a wicket maiden for Ishant.

Gill and Uthappa then joined hands to stitch together a 63-run stand for the second wicket.

Uthappa hit three fours off the in-form Rabada in the fourth over but the South Africa pacer made amends by removing the experienced right hander with Rishabh Pant taking a brilliant diving catch behind the stumps.

Nitish Rana (11) was castled by a Morris yorker as the home team promoted Russell up the order.

Russell and Gill took Axar Patel for 16 runs in the 14th over but the U-19 World Cup winner got out in the next over, giving a catch to Patel at short fine-leg while trying to flick Paul through that area.

Skipper Dinesh Karthik (2) failed to contribute, clipping a full delivery on the pads by Rabada to Shikhar Dhawan at deep square-leg.

However, some lusty blows by Russell help the team post a competitive total.