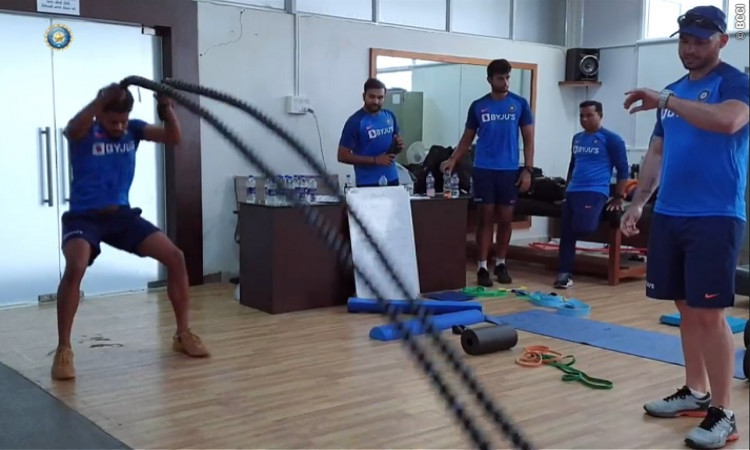 Rajkot, Nov 7: India may be 0-1 behind Bangladesh in the ongoing three-match T20I rubber but the Indian team management is leaving no stone unturned to keep the players fit before the crucial second contest, scheduled to be held here on Thursday. In a video posted by the BCCI, two star India players -- KL Rahul and Shreyas Iyer -- were seen involved in a rope challenge, where the latter defeated the former by a margin of 5.

In the challenge, both the cricketers were asked to compete for 30 seconds and whosoever performs the maximum number of times would win it. While KL Rahul could perform the exercise 45 times in the allotted time, the Mumbai batsman defeated his opponent by doing the task 50 times in 30 seconds.

Also Read: Shivam Dube should make his own name, has talent: Yuvraj Singh

Both Rahul ahd Shreyas had failed to put up a show against the Bangla Tigers in the first game as the former could only manage to contribute 15 runs while the latter chipped in with 22 runs as India posted a moderate 148/6 in the 20 overs. In return, Mushfiqur Rahim's unbeaten 60 guided the visitors home with three balls to spare.

It was also the maiden victory for Bangladesh over the Men in Blue in the shortest format of the game.

Both the sides will now clash here on Thursday at the Saurashtra Cricket Association Stadium.