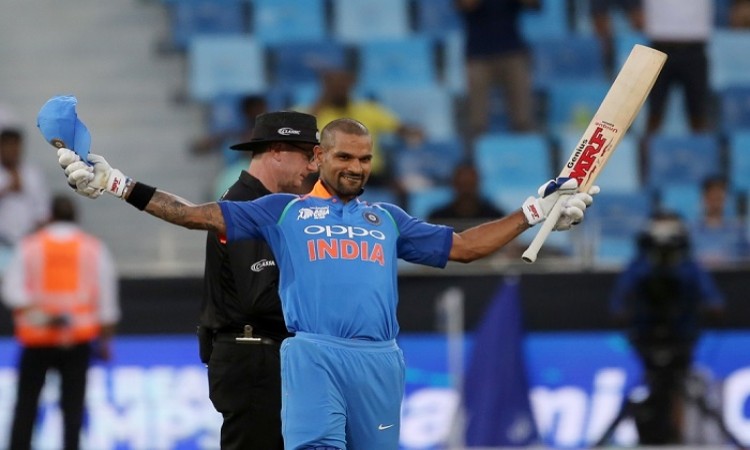 Dubai, Sep 18 (CRICKETNMORE):  Opener Shikhar Dhawan (127) smashed a brilliant century to set a perfect platform but some poor batting from the middle-order saw India posting 285/7 runs against Hong Kong in Group A One-Day International (ODI) match of the Asia Cup here on Tuesday.

At one point India 240/2 in 40 overs but after the fall of Dhawan, who slammed his 14th ODI ton, the other middle-order batsmen went to pavilion one after another, thanks to clever bowling by the Hong Kong spinners.

Put in to bat, Indian openers Rohit Sharma (23) and Dhawan started the proceeding on a positive note, forging a 45-run disciplined partnership in eight overs. Rohit displayed some beautifully crafted shots but was soon picked up by pacer Ehsan Khan. His 22 ball innings included four boundaries.

New batsman Ambati Rayudu (60) then joined Dhawan in the middle started punishing the bad balls. The duo played freely and smashing the Hong Kong bowlers all around the park to build a 100-run partnership.

Rayudu and Dhawan completed half-century before Rayudu was caught by Scott McKechnie off Ehsan Nawaz in the 30th over. But unperturbed by the fall of wicket, Dhawan kept on playing the attacking game and completed his 14th ton.

New batsmen Dinesh Karthik and Dhawan then played attacking cricket and in the process Dhawan gifted his wicket to spinner K.D. Shah. His 120 ball innings was comprised of 15 boundaries and two sixes.

It was all going perfect, but after Dhawan's wicket, spinners attacked Indian batsmen and took wickets in clusters.

The first one to go was M.S. Dhoni (0) and then it was Karthik. Kedar Jadhav (28 not out) along with other batters --Bhuvneshwar Kumar (9), Shardul Thakur (0) and Kuldeep Yadav (0), however tried to pace up the innings towards the end but could not breach the 300-run mark.