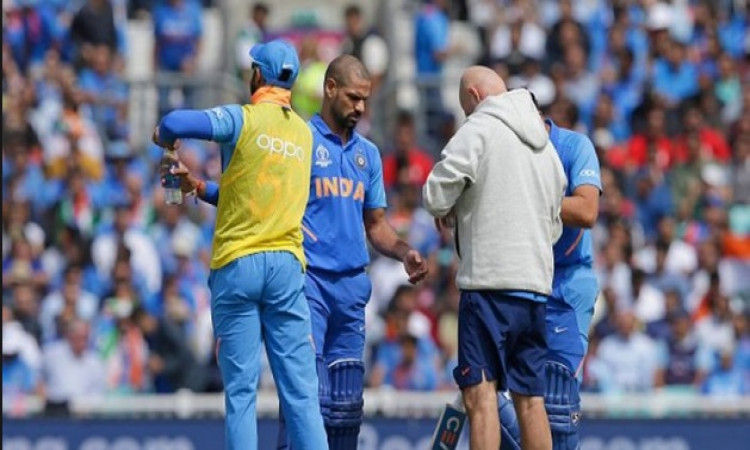 Southampton, June 19 (CRICKETNMORE):  India opener Shikhar Dhawan has been ruled out of the 2019 edition of the World Cup as he is not in a position to recover in time for the remaining games of the showpiece event. While IANS had broken the news, team manager Sunil Subramaniam addressed the media in Southampton on Wednesday and confirmed the same.

"Shikhar has a fracture on the left hand, following several opinions he will remain in cast until July 2019. We have requested ICC for Rishabh pant as a replacement," he said.

IANS learnt that Dhawan visited a specialist on Wednesday morning before the call to bring in Pant as replacement was taken.

Explaining the nature of fracture, BCCI tweeted: "Dhawan has been diagnosed with a fracture of the first metacarpal on his left hand following a ball impact injury during the team's first match versus Australia at the Oval on 5th June 2019."

Earlier, India's assistant coach Sanjay Bangar had said that the team management did not want to rule out Dhawan and wanted to observe his progress.

"We will take at least 10-12 days to take a call on Shikhar's condition. We don't want to rule out a precious player like him," Bangar had told the media on the eve of India's third World Cup clash against New Zealand.

Speaking after the India-New Zealand game was washed out, skipper Virat Kohli had revealed the reason behind keeping Dhawan under observation.

"Hopefully, the injury heals quickly and he (Dhawan) will be available for the latter half of our league games and semi-finals for sure. From that point of view, we want to hold him back, keep him here. He wants to play. I think that kind of mindset will help in healing the injury. Dhawan is going to be in a plaster for a couple of weeks. After that we will assess where he stands," Kohli had said.

Dhawan suffered the injury after being hit by a Pat Cummins delivery during his 109-ball 117 knock against Australia. While the X-ray didn't show any fracture, CT scan revealed otherwise and Dhawan was taken to a specialist for further assessment.