"Then again, maybe I shouldn't have visited the place at all. And if that is what you have against me, I am very sorry...I would try to make sure that this never happens again," says Shakib Al Hasan while apologizing to the fundamentalist person and his associates, who threatened to kill the Bangladesh all-rounder. 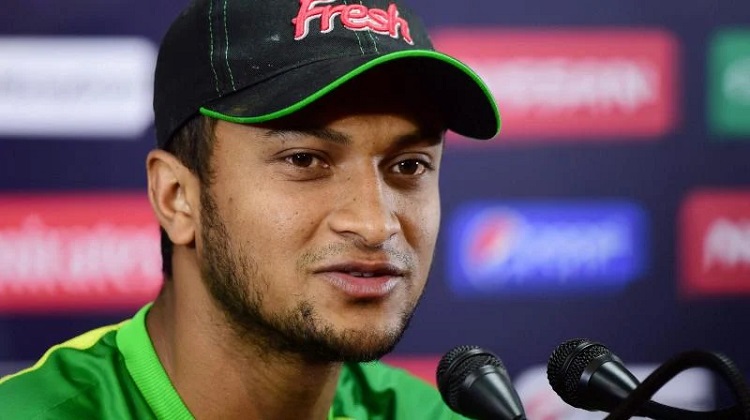 Last Thursday, Shakib went to Kolkata via the Petrapole border to inaugurate a Kali Puja in the Beleghata area of the West Bengal capital. He was seen praying in front of the idol. He then returned to Bangladesh on Friday.

On his YouTube channel, the Bangladesh cricketer has now opened up about two controversial issues involving him and has apologized for his actions which triggered waves of criticism on social media.

On the matter of the Kali Puja ceremony, he has offered an apology firsthand.

"In the news here or on social media, it has been said that I went there to inaugurate the ceremony. I did not go there to do it, neither did I do it. You can easily verify this. As a 'conscious Muslim' I wouldn't do that either," said Shakib.

"The incident is obviously very sensitive. I want to start by saying that I think of myself as a 'proud Muslim' and that is what I follow. Mistakes could happen...If I did make any mistake, I ask for your forgiveness," he added.

The 33-year-old went on to say that the ceremony had already begun when he arrived at the place and he spoke about the time he spent there.

Another controversy erupted after the cricketer allegedly tossed away and broke the mobile phone of a fan while on his way to India at Benapole's international immigration checkpoint.

Mohammad Sector, a resident of Benapole, had claimed, "I'm a fan of Shakib Al Hasan, I'd never seen him face to face. When I saw him that day at Benapole checkpoint, I could not control myself."

"Is it a crime to ask for a selfie with him? He seized the phone and furiously flanged it. As a result, my phone is now broken and out of order," Mohammad added.

In his apology video, Shakib has claimed that the outcome of the incident was unintentional.

"This video aims to clear up two matters to you. The first is about breaking the phone...I had never intended to break the phone. I was only trying to keep myself at a safe distance (from others) following the health directives in the Covid-19 times," the left-handed all-rounder explained.

"A curious person wanted to take a photo coming so close to me. When I attempted to push him away, our hands came into contact and his phone fell down. It may have been broken and I sincerely apologize if that is the case. But I think he should have been cautious as well," he added.

Mohsin Talukder, a resident of Shahpur Talukder Para in Sylhet, had started a Facebook Live at 12.06 p.m. on Sunday, claiming that Shakib's behavior had 'hurt Muslims'. He threatened to cut Shakib to pieces with a chopper. The young man even said that that he would walk from Sylhet to Dhaka to kill Shakib if necessary.

However, he later came to Facebook Live again and apologized for his actions. Both videos have been removed from Facebook.

Mohsin's family claimed he is drug-addicted and his wife has been arrested after the man absconded in the afternoon, confirmed local police of Sylhet Metropolitan Police on Tuesday morning.

Shakib was handed a two-year ban, with a one-year suspended sentence, by ICC's Anti-Corruption Unit on October 29 last year, for failing to report multiple corrupt approaches. The ban period ended on October 29 this year after which he has become eligible to play cricket again.