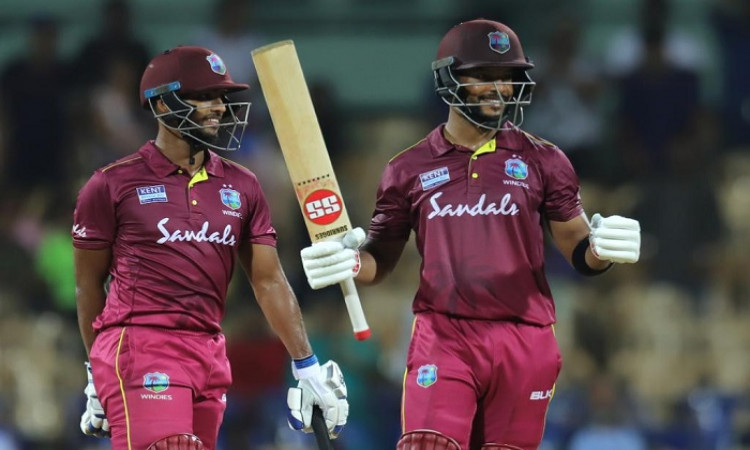 New Delhi, Dec 16: Legendary cricketer Brian Lara feels Shai Hope, who scored a magnificent hundred in the first ODI which West Indies won by eight wickets against India, is the "best option" available in the Caribbean team capable of performing in all the three formats of the game.

On Sunday, Hope scored an unbeaten 102 and alongside Shimron Hetmyer (139 off 106) stitched together a 218-run partnership as Windies chased down 288-run target with utmost ease in Chennai and took a 1-0 lead in the three-match series.

Speaking to IANS on the sidelines of an event for Usha International, Lara said that Hope could be the talisman in the mould of the former West Indies captain himself or Chris Gayle after him due to his ability to play in all formats of the game.

"Presently, I think Shai Hope is the best option we have in terms of a batsman who can play all formats. He is not a bad attacking player, pretty much a decent Test player. He will stand out.

"Pooran, Hetmyer and even Brandon King the new find, these are guys that you can mould. I think that they will mature a little bit later than others. Some guys like Sachin Tendulkar -- at 16 he was already a mature cricketer -- or Carl Hooper matured very early. There is nothing wrong with maturing later in life," he pointed.

Skipper Kieron Pollard had spoken about the West Indies being on a mission to become a better ODI team. They are currently placed ninth on the ODI rankings and had a largely dismal showing in the World Cup earlier in the year. Lara feels that they need to take their time in the middle-overs while batting in ODIs instead of going for shots and jeopardising their wicket.

"I could go back to when I played, I was pretty much a diminutive player, not very strong, and I felt that the one day game helped me manoeuvre well," he said. "The middle overs are very important. When you compare the 20-over game to the 50-over game, the disparity is huge.

"Some players are maybe caught in the mindset of attacking every single ball. You have to understand that it is a seven-hour game and a lot can happen within it," he said.

According to Lara, the young talent which West Indies have at the moment needs to be given time and security by the selectors so they can play freely without any fear of losing their spot and revive country's cricket which has been on a downhill in the past few years.

"It's just that the West Indies have to understand and be patient. Make sure you give the right ingredients every single time. You don't want guys to be losing confidence because they are in and out of the team. They have to know that these guys have the talent, let's stick with them let's feed them the right food, for the lack of a better word, to make sure that they improve."

Lara said that the biggest takeaway from West Indies' performance in the T20Is was their batting, while pointing out that bowling needs to be looked at. While there were positive showings from the likes of pacer Kesrick Williams and spinner Hayden Walsh jr., the fact remains that West Indies allowed India to cross 200 twice in a three-match series.

"I think they know that the batting is going to get better through experience. It's the bowling that they will have to tweak a bit to make sure that they get the right combination. Hopefully they will take a lot back from the series and get the confidence needed. It's roughly nine-ten months to the World Cup and I'm sure the West Indies are going to present themselves well," he said.

Lara feels that Pollard's experience is something that can come in handy for the younger players currently in the squad. "Pollard has been given a huge job, a great responsibility as the captain. I think he has an opportunity with all his experience around the world, to give something back in terms of representing West Indies cricket. I think he is going to be a positive influence on the youngsters," he said.

He also said that all rounder Dwayne Bravo, who has come out of retirement and made himself available for T20I selection, will however have to find a way to fit into the squad with all the young talent that is available. "I know he has come out of retirement and is back in contention. He is always a good player to have around, but he will have to fit into the mould. They have got a very good group of young cricketers," said Lara.

Lara believes it is important that those in power in the West Indies cricket board devise a way in which the team doesn't get affected when players go to play T20 franchise leagues. Issues between players and administrators and various other factors led to an exodus of Test regulars like Chris Gayle, Dwayne Bravo and Darren Sammy practically giving up their careers in the longest format of the game and focussing on franchise cricket.

Recent years have seen a relaxation of the standoff between the board and the players which has, in turn, led to the return of likes of Gayle, Andre Russell, Sunil Narine and current limited overs captain Pollard returning to the international fold.

"They have to construct a plan where it (T20 franchises) doesn't affect West Indies cricket. You can't hide from the fact that every single young player around the world wants to play in the IPL (Indian Premier League). And I don't think it's a money thing. You play on a stage where you have 50-60 thousand people following you around for six weeks -- who wouldn't want to play in it. I would want to play in it.

Lara grew up at a time when teams led by Clive Lloyd and later Sir Viv Richards ruled the cricketing world, which was motivation enough for anyone to play for the team. "Every parent wanted their sons to play for the West Indies. That was my motivation. The (current) youngsters will need a little bit of a kick to let them know what it's all about playing for the West Indies," he said.