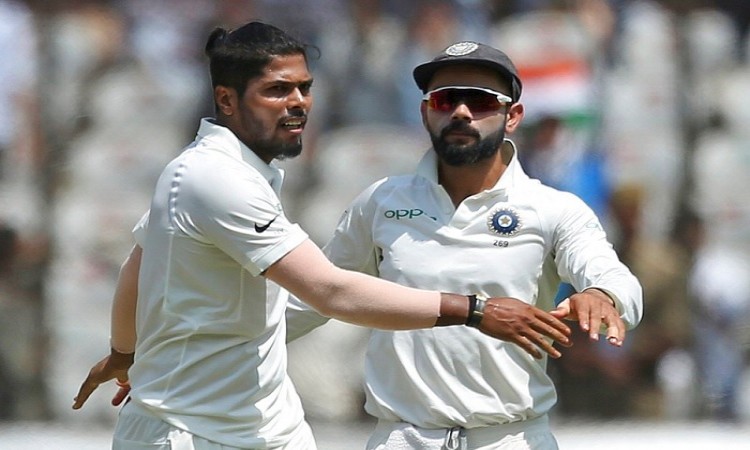 Hyderabad, Oct 12 (CRICKETNMORE):  The Indian team continued to criticise the 'SG Test' ball as not being ideal after pacer Umesh Yadav on Friday said the bowlers are unable to run through lower-order when it gets old.

"In India with SG Test balls on these kind of flat tracks, you neither get pace nor bounce. So it is difficult to get the lower order out," Umesh said after the opening day's play here.

India skipper Virat Kohli has already spoken on similar lines, pushing for the use of the hand-made Dukes ball from England.

"So (with SG) all you can do is to bowl one spot but then you will realise that nothing is happening even off the pitch nor is it swinging. So when middle and lower order comes in they know that ball has become soft and it doesn't come at a pace and batting becomes easier," said Umesh, who returned figures 3/83 on day 1 of the second Test.

"Tail-enders know that it will neither swing nor reverse. You just have to wait for something to happen and keep trying. But you can't really do it on such a big ground, the ones and twos keep coming. And West Indies' game is like that only."

Umesh revealed he prepared himself to bowl extra overs after Shardul Thakur picked up a groin injury.

"Had Shardul been there, it would have been more help for the spinners. Like I got three wickets and if he could have chipped in with a couple, it would have only helped our team. But you can't really do anything in these situations as this is part and parcel of the game."

"If he (Shardul) is not there, I will have to bowl his quota of overs too and I knew he was not going to come back. I didn't want negativity to creep inside me that we are now one bowler short," the Vidarbha pacer said.

Asked if it affects him that he has only been part of three out of the 10 Tests that India have played so far, Umesh gave a matter-of-fact reply.

"If I keep thinking about the past, then I won't be able to focus on the future. It's past and I am looking ahead. I don't want to dwell on the matches that have gone by. My thinking is that I should try and perform well in the future matches and help my team," he said.