Rahul Tewatia's five sixes off the 18th over bowled by Sheldon Cottrell coupled with Sanju Samson's 85 off 42 balls helped Rajasthan Royals overhaul a target of 224 set by Kings XI Punjab on Sunday at the Sharjah Cricket Stadium. RR won the match by four wickets and thus broke the record for the highest successful run chase in the IPL history. 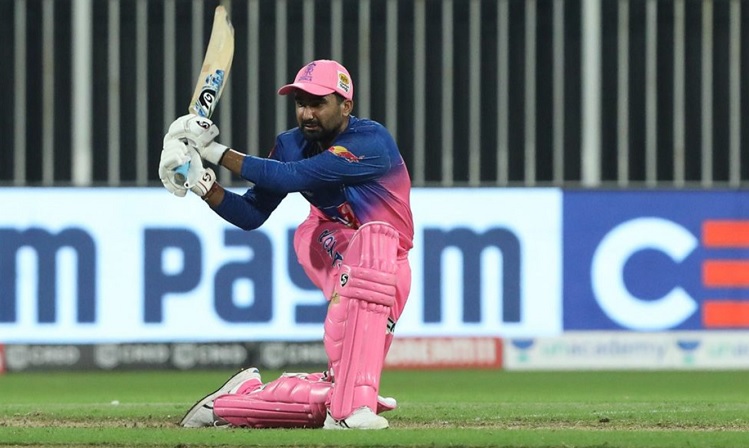 RR lost their first wicket early in the form of the dangerous Jos Buttler.

Samson and captain Steve Smith, however, ensured that their side reach 100 before the 10th over. Smith soon fell on 50 off 27 deliveries off the last ball of the ninth over after which Tewatia was promoted ahead of Robin Uthappa.

In stark contrast to the way he played towards the end of the innings, Tewatia struggled to score runs for much of the early part of his innings while Samson went big guns at the other end.

The latter eventually fell to Mohammed Shami, thus making it look like KXIP are closing in on an easy victory.

However, Tewatia, who at one point had scored just eight runs off 19 balls, smashed 30 runs off the 18th over to flip the tables on KXIP. He was eventually dismissed on 53 but Jofra Archer saw them over the line with 13 runs off just three balls.

Earlier, Mayank scored 106 from 50 balls, his innings punctuated by as many seven sixes and 10 fours. Rahul, on the other hand, scored 69 off 54, smashing seven fours and one six.