Saliva ban won't make much of a difference in ODIs, T20Is: Dinesh Karthik

Kolkata, June 11:  The ban on the use of saliva to shine cricket balls won't have too much of a bearing in shorter formats but it will definitely affect the bowlers when they operate with the red cherry during Test cricket, feels India wicketkeeper batsman Dinesh Karthik. 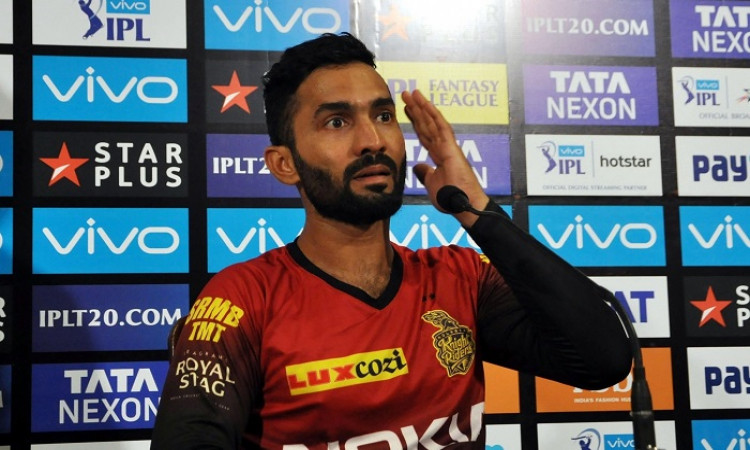 The International Cricket Council (ICC) recently confirmed interim changes to its playing regulations, which include the ban on the use of saliva to shine the ball.

Karthik, who is the captain of two-time Indian Premier League (IPL) champions Kolkata Knight Riders (KKR), said while it won't be a worry during ODI and T20 games, bowlers will find the going tough when it comes to five-day matches.

"In ODIs and T20s, it won't make much of a difference but definitely in Test cricket it's going to be a massive challenge for a lot of the bowlers," Karthik said during a video conference with reporters to launch KKR's initiative, 'KKR Sahayata Vahan', which will cater to multiple locations across West Bengal and help distribute essential kits to people affected by Cyclone Amphan.

"Simply because, especially when the ball is new for the first 20-30 overs in most parts of the grounds of the world, I think conventional swing is what they look for and if they don't apply saliva it's going to be a tough ask for them to swing a ball," said the 35-year old.

The 13th edition of the IPL has been postponed due to the COVID-19 pandemic which has brought the world to a standstill. There are talks of the high-profile league happening during the October-November window provided the T20 World Cup, slated to take place during that period, does not see the light of the day.

Asked if a break from the rigours of an IPL has actually helped him extend his career, Karthik who recently celebrated his 35th birthday, said: "I don't think it's a concern of my career or anybody else's career. Nobody wants these devastations and catastrophes to happen. Anyday, I am happy to go through the IPL over a catastrophy..not only COVID-19 but also cyclone Amphan. Anyday I will take an IPL over that.

Karthik also said if KKR win a third IPL crown, they will dedicate it to the people affected by Cyclone Amphan.

"That would be the least we can do for the state. We are emotionally very attached to Kolkata."

On his downtime during the lockdown, the veteran stumper added: " If there is one thing that I have got in is training. When I say training, I mean my physical game and running. Not cricket. Not even running so much, more of gym.

"I have had a quiet routine in terms of waking up, training, eating food, watching TV and going back to sleep again. I have got in physical training for an hour and a half everyday."