Mumbai, March 8:  Virender Sehwag and Sachin Tendulkar turned back the clock as they led India Legends to a seven-wicket win over West Indies Legends in the first match of the Road Safety World Series at the Wankhede Stadium in Mumbai. Sehwag and Tendulkar's 83-run opening stand set the foundation as Yuvraj Singh and Mohammed Kaif later combined to help chase down a target of 151 with 10 balls to spare. 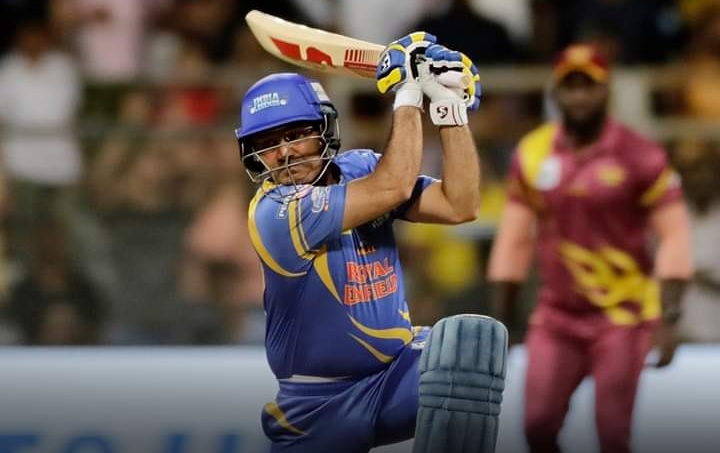 While the Mumbai crowd chanted for its beloved Tendulkar, Sehwag lit up the venue with his entertaining and match-winning knock of 74 not out (57 balls, 11x4) taking India to 151/3 in 18.2 overs. Meanwhile, Tendulkar got a quickfire 36 (29 balls, 7x4) before nicking left-arm spinner Suleiman Benn to wicket-keeper Ridley Jacobs on Saturday.

After Tendulka's exit, Mohd Kaif tried to steady the ship, but West Indies's Carl Hooper put the brakes by getting Kaif and Manpreet Gony on back-to-back deliveries.

In came Yuvraj Singh and he brought India back into the game with a huge six off leggie Dinanath Ramnarine before Sehwag finished it in style.

Earlier, India legends restricted West Indies legend to 150 for eight after the host captain Tendulkar put them into bat after winning the toss. If not for Windies veteran and their saviour Shivnarine Chanderpaul's 61-run knock off 41 balls, the visitors would have struggled to reach the total.

While Chanderpaul almost played through the innings for his half century before getting out in the 20th over, thanks to Munaf Patel, his partners could not put up a challenge against a disciplined Indian attack.

Opener Darren Ganga was the second highest run-getter after Chanderpaul with a 24-ball 32, which included five boundaries. Other than Chanderpaul and Ganga none of the West Indian batsmen could breach the 20-run mark.

Ganga who gave a positive start to the Windies succumbed to a beauty from Khan that cost the latter's stump.

Lara came in next and he charged Khan immediately with a beautiful boundary over covers followed by a push to the point boundary.

As his eyes were setting in, Lara failed to connect an Irfan Pathan's slower delivery which saw him get stumped for 17. This came after the south-paw hit the medium-pacer through an eye pleasing cover drive to the fence.

While the Indians kept taking wickets at one end, Chanderpaul, on the other, kept his fight with a stubborn approach and eventually fell in the 19.3 over, but not without helping Windies reach a respectable total.