Rajasthan Royals (RR), on Wednesday, unleashed Jofra Archer with full force against the Kolkata Knight Riders (KKR). The English bowler returned his best figures of this IPL even as he regularly clocked around 150 kmph. The gangling bowler's fastest delivery was clocked at 152.1 kmph, in the 14th over, and he finished with superb figures of 2/18 in four overs. 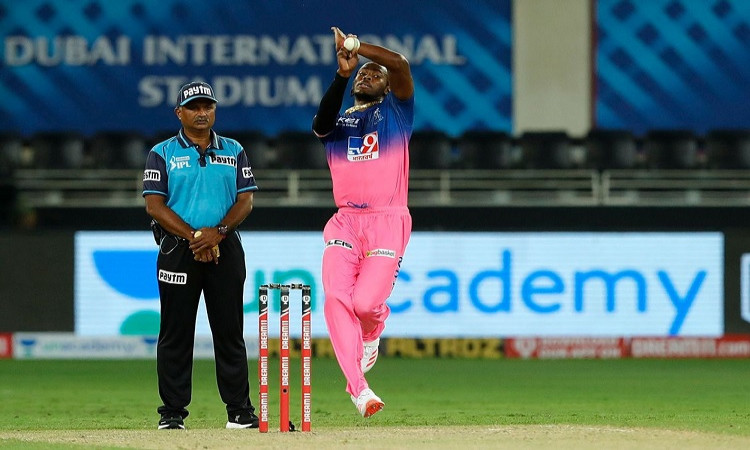 Archer, 25, would have taken another wicket had Tom Curran not dropped Eoin Morgan at deep backward point boundary in the 20th and last over of the KKR innings. The missed catch near the boundary line resulted in a six.

Born in Bridgetown, West Indies, Archer was modest when asked about his speed.

"I didn't see the speeds on the big screen, so not sure at what speed I was bowling. You can hit your lengths comfortably here as compared to Sharjah where even good balls can go to the boundary. I think they got 15 runs more than we would have liked. We have batting till number 11, but we need to adapt as the conditions in Dubai are different as compared to Sharjah," he said after his brilliant spell.

That Archer was totally focussed on the job at hand was evident from the way he caught Shubman Gill off his own bowling as Kolkata Knight Riders lost two quick wickets. As Gill miscued the shot and the ball popped up high in the air, near Archer, he waved off wicket-keeper Jos Buttler who was also running towards the ball. Archer completed the catch quite comfortably.

When asked about the catch, Jofra said he was only watching the ball and not Buttler. After completing the catch, Buttler had a laugh -- perhaps feeling a little embarrassed that he might have distracted Archer -- as he celebrated the wicket with his England teammate.

In the first of this IPL, Archer bagged 1/26 in four overs against Chennai Super Kings as Rajasthan Royals won by 16 runs in Sharjah. But in the second match against Kings XI Punjab, he became a victim of the assault that KL Rahul and Mayank Agarwal unleashed on all the RR bowlers. Archer conceded 46 runs in four overs, but Sanju Samson and Rahul Tewatia propelled RR to an improbable four-wicket win.

Archer is at ease bowling in all formats of the game. The Sussex player has represented several teams in T20 leagues around the world and made an impression. These teams include Khulna Titans, Hobart Hurricanes, Galaxy Gladiators Lantau, and Quetta Gladiators.