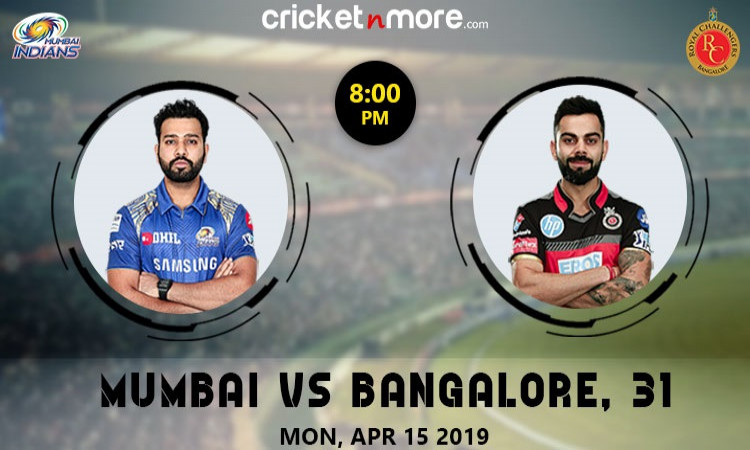 Mumbai, April 14 (CRICKETNMORE): For the first time in this edition of the Indian Premier League, Royal Challengers Bangalore will go into a game as favourites. After a convincing win against Kings XI Punjab, RCB will now take on Mumbai Indians at the Wankhede Stadium on Monday.

While Mumbai Indians are seated third on the points table with four wins from seven games, they lost their last match against Rajasthan Royals at the same venue on Saturday. On the other hand, even though RCB is placed last on the table with just one win in seven outings, the fact that they beat KXIP at home on Saturday will surely motivate them further.

Speaking after Saturday's game, while Kohli had mentioned how his players still have the desire to go out and express themselves, Man of the Match AB de Villiers had rung the warning bell for the opposition saying he loves playing at the Wankhede. Not good signs for Rohit Sharma and his boys for sure.

Also, the clinical way that RCB chased down KXIP's total of 173 shows that the batting unit is definitely in form. With Dale Steyn joining the squad, the bowling too will wear a bolstered look. In fact, uncapped Navdeep Saini would like to take the opportunity of learning from the pro in the remaining games. Saini has by far been the most impressive bowler for RCB and Mumbai Indians too would look to play him cautiously.

In the batting department, Mumbai have little worries as both Rohit and opening partner Quinton de Kock have been in fine form. With Kieron Pollard also showing that he still has match-winning abilities and Hardik Pandya finishing with a bang in almost all games, the batting part of things look sorted for the home team.

The same though cannot be said about the bowling as only Krunal Pandya and Jasprit Bumrah have looked good on a consistent basis. While one can't be too harsh on the bowlers considering that the wicket at the Wankhede is known to aide batsmen, but considering the RCB line-up, Rohit will definitely want his boys to pull up their socks.