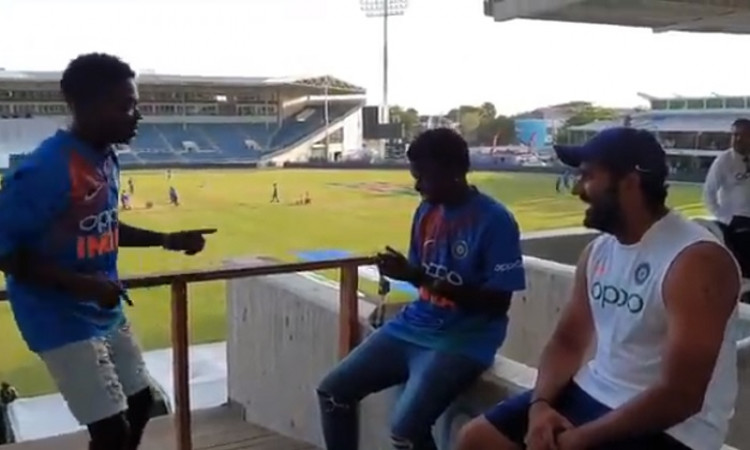 Kingston (Jamaica), Sep 3: Senior batsman Rohit Sharma added colour to India's 2-0 series win celebrations against the West Indies by pulling aside two of his supporters from the stands and shaking a leg with them on Monday evening.

India swept West Indies under the carpet over two Tests and won the second Test by 257 runs to complete the whitewash with astounding ease on Day 4 at the historic Sabina Park.

Skipper Virat Kohli added yet another feather to his cap as he became India's most successful captain in the longest format of the game after the emphatic win. India had won by 318 runs in the first Test in Antigua.

India's limited overs vice-captain and World Cup hero Rohit did not play any part in the two Tests as Hanuma Vihari was preferred over him. The 25-year-old Vihari lapped the chance with both hands as he notched up his maiden hundred in the first innings of the second Test and followed it up with a fifty in the second innings.

But Rohit, who scored five centuries in the World Cup, was in no mood to sulk as he joined the party of the team's resounding success by calling out two fans wearing India limited overs T-shirt with his name written on the back to spend time with him.

In a video shared by the Board of Control for Cricket in India (BCCI), Rohit was seen joining in on the moves with the two boys as they all had a great time. Rohit also interacted with them to make their day.

"This is awesome from Rohit when he randomly pulled out two of his loyal fans from the crowd in Jamaica," said the BCCI tweet.

This is awesome from @ImRo45 when he randomly pulled out two of his loyal fans from the crowd in Jamaica #TeamIndia pic.twitter.com/PqRV1xtjgH