Rohit, Dhawan, Rahul might all play together: Virat Kohli

Mumbai, Jan 13:  Contrary to all the talk, there might be a possibility where all three -- Rohit Sharma, Shikhar Dhawan and K.L. Rahul -- will play against Australia in the first ODI of the three-match series starting Tuesday, India skipper Virat Kohli has said. 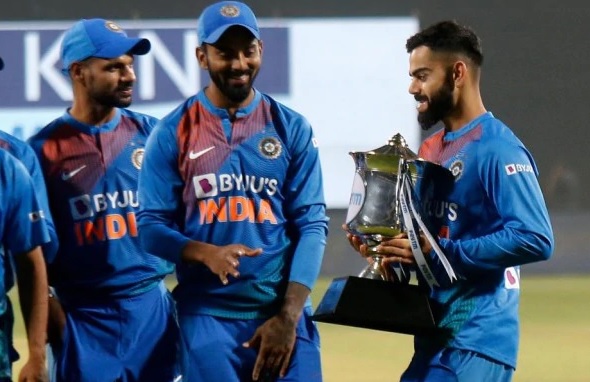 "Look, a guy in form is always good for the team...You obviously want to have the best players available and then choose from what the combination should be for the team. There might be a possibility that all three (Rohit, Shikhar and Rahul) might play. It will be interesting to see what balance we want to take in on the field," Kohli said on the eve of the match scheduled to be played at the Wankhede.


Open to play D-N Test in Aus, be it Perth or Gabba: Virat Kohli

With Rohit having had an excellent 2019 -- 2,442 runs across formats -- there is a three-way tussle for India's white-ball opening slots. It gets particularly stiffer in T20Is, with Rahul averaging 44.17 in the format, as opposed to Dhawan's 28.35.

The 34-year-old Dhawan, who was making a comeback after an injury layoff, scored 32 and 52 in the two games against Sri Lanka and is not fussed about the competition.

Kohli was quizzed about his batting position if all three play as the captain comes in at No.3.

"Being the captain of the team, it is my job to make sure that the next lot is also ready. A lot of the other people might not look at it that way, but your job as a captain is not only to look after the team right now, but also to prepare a team that you leave behind when you eventually pass it onto someone else," he added.