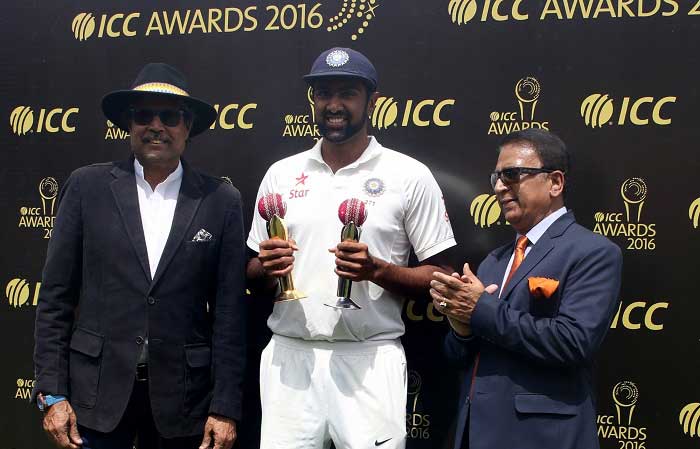 Ashwin had finished 2015 as the number-one ranked Test bowler in the world, a position he twice reclaimed in 2016.

On winning the ICC awards, Ashwin said: "It has been a great honour to be named by the ICC for two top awards and it is dreamlike to actually receive them here."

"What has been greatly satisfying for me is that I have helped the team do well during this period. We have a great unit that has done well across formats. Being on top of the Test table, in particular, is an accomplishment we are all proud of."

"I'd like to thank all my team-members, team management and support staff for helping me perform. I hope to continue doing well and help my team win many matches in the coming years."

ICC Chief Executive David Richardson said in a release: "Ashwin has shown time and again that he is a match-winner in the true sense. I congratulate him for joining a select band of cricketers to have won these two top ICC awards."

"I thank the ICC for recognising and encouraging players with these awards because such moments always remain in one's memory," Ashwin said.

Kapil Dev, who presented the Garfield Sobers Trophy for ICC Cricketer of the Year to Ashwin, said: "Congratulations to Ashwin for winning this ICC award. Ashwin has shown his penchant for winning Test matches time and again. He has played a big part in India becoming the top-ranked Test side. Not for nothing has he himself been ranked the number-one bowler on the ICC Test rankings for so many weeks."

"Ashwin is a big asset for the team as he is useful with the bat and is a thinking all-rounder. I'm sure he will have a lot many successes in the coming years and help India win many more matches, both at home and abroad."

Gavaskar, who presented the ICC Test Cricketer of the Year award to Ashwin, said: "India has always produced some of the finest spin bowlers seen in the game. Ravichandran Ashwin and Ravindra Jadeja are the latest who are upholding that wonderful tradition. It is never easy for a spinner to make the adjustments required for the different formats of the game. Ashwin in particular has made these changes seemingly without any effort and continues to pick wickets in all formats of the game."

"Besides he is a batsman who prizes his wicket dearly and makes useful contributions with the bat. The number of Man of the Match awards and Man of the Series awards he has won show why he is the biggest match winner for India in recent times," Gavaskar said.

"He thoroughly deserves all the accolades coming his way including the latest, the coveted Garfield Sobers Trophy. Well done and hearty congratulations to Ashwin."