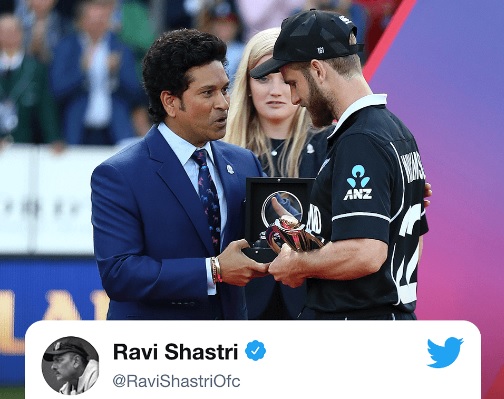 The Kiwis lost the final to England on July 14 due to inferior boundary count after both the 50 overs and the Super Over ended in ties.

In a tweet, Shastri praised Williamson and said Williamson's silence since the match is remarkable and wished blessings upon him.

"Your composure and dignity viewing the sequence of events was remarkable. Your dignified grace and silence 48 hours since is simply remarkable. We know you have one hand on that WC. You not just Kane. You Kane and Able. God bless," Shastri tweeted.

Earlier, Williamson had said that the loss against the hosts based on the boundary countback rule was hard to swallow.

"I never thought I would have to answer this. It's pretty hard to swallow when two teams have worked really hard to reach this point. It's what it is, the rules were there at the start, no one thought it would come down to this," Williamson had said after the match.

This was the second successive time that New Zealand finished runners-up in the World Cup as under the leadership of Brendon McCullum, the Kiwis had lost the final of the 2015 edition to Australia.