New Delhi, Jan 20: Manoj Tiwary's scintillating knock of 303 guided Bengal to post 635/7 against Hyderabad before reducing the visitors to 83/5 in a Round 6 Ranji Trophy tie at the Bengal Cricket Academy Ground here on Monday. 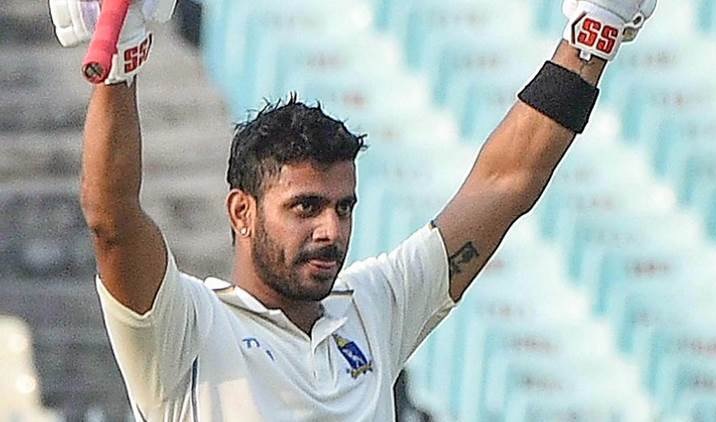 Apart from Tiwary, Shreevats Goswami chipped in with 95 runs before the hosts rode Akash Deep's 3/46 to put Hyderabad on the back foot.

Meanwhile, after wrapping up Delhi for 163 runs, Vidarbha were 35 for no loss at the end of the day.

On the other side, ace India spinner Ravichnadran Ashwin picked up three wickets as Tamil Nadu came up with a commanding performance to beat Railways by an innings and 64 runs.

Resuming at 236/4, Tamil Nadu suffered an early jolt but managed to finish with a massive 154-run first innings lead. The Railway batsmen were shot out in 36.4 overs as R Sai Kishore (5/16) and Ashwin (3/36) dismantled their batting.

Upendra Yadav slammed an unbeaten 203 as UP declared at 625/8 against Mumbai. Mumbai were then reduced to 2/20 with Shashank Attarde (9) and Jay Bista (3) dismissed by Ankit Rajpoot.

Resuming at 295/8, Sheldon Jackson with Jaydev Unadkat took Saurashtra to 344. Jackson added 43 runs from his end before being the last man to be dismissed.

Madhya Pradesh batters then struggled and lost wickets at regular intervals before Yash Dubey (50 not out) and Venkatesh Iyer (50 not out) repaired the damage to help their side reach 183/5 at the close of play.