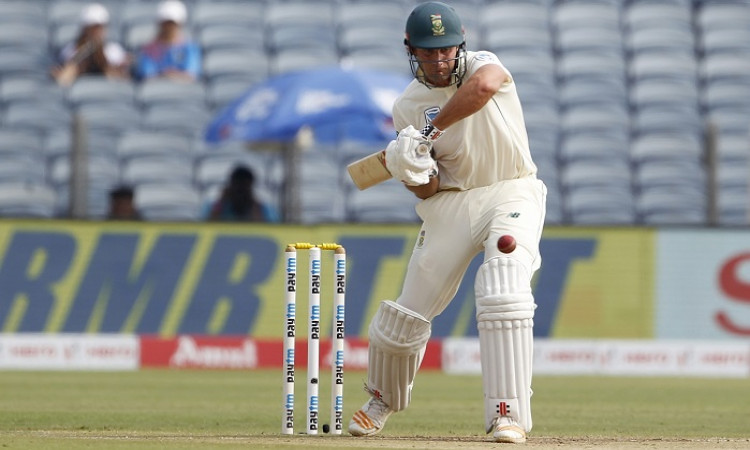 Ranchi, Oct 21:  South Africa opener Dean Elgar has been replaced by Theunis de Bruyn as a concussion substitute. This after the opener had to retire hurt post a knock on the helmet by a rising Umesh Yadav delivery just before the Tea break on Day 3 of the third and final Test against India at the JSCA Stadium on Monday.

de Bruyn was part of the South Africa XI in the Pune Test where they lost by an innings and 137 runs.

In the 10th over of South Africa's second innings, Elgar, who was batting on 16, was struck on his helmet by a fierce bouncer from Umesh. The left-handed batsman immediately went to the ground. The Indian players rushed towards him to see if he was alright while the physio ran in.

During the break, Elgar retired hurt and was taken to a hospital for a concussion test. Debutant George Linde was sent to proceed the innings alongside Heinrich Klaasen for the final session of the day's play.

Cricket rules for the World Test Championship were tweaked recently to allow players who suffer concussions during a match to be replaced in their team's Playing XI.

The visitors are on the brink of another embarrasing defeat as they got bowled out for a mere 162 in their first innings in reply to India's 497/9 declared. In the second innings also they are in trouble having lost four wickets before the tea interval.