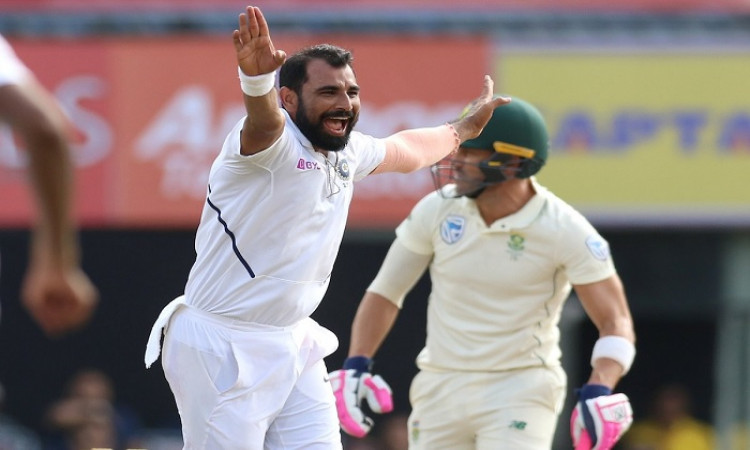 Ranchi, Oct 21:  India's bowlers, led by Mohammed Shami, pushed Virat Kohli and boys closer to a 3-0 whitewash as South Africa were left tottering at 132/8 at stumps on Day 3 after following on in the third and final Test at the JSCA Stadium on Monday.

At close of play, Dean Elgar's concussion substitute Theunis de Bruyn was batting on 30 with Anrich Nortje (5) for company. While Shami has figures of 3/10 in the second innings, Umesh Yadav has picked two as the Indian pacers once again dominated the show.

Bundled out for just 162 in the first innings, the Proteas were forced to follow on and they trail India by 203 runs with just two wickets in the bag in their second essay. While bad light did force the players to go off the field after the Indians asked for an extra 30 minutes at the fall of the eighth wicket, the South Africans are only delaying the inevitable.

To make matters worse for the Proteas, Elgar had to retire hurt post a knock on the helmet by a rising Umesh delivery just before the Tea break. India too had an injury concern as Wriddhiman Saha got hit on the ring finger of his left hand late and was replaced by Rishabh Pant in the last session of the day.

Earlier, a total of 16 wickets fell on Monday after South Africa resumed at 9/2. Umesh returned with figures of 3/40 in the first essay while Shami, debutant Shahbaz Nadeem and Ravindra Jadeja all scalped two wickets apiece. Ace off-spinner Ravichandran Ashwin, however, remained wicketless. For the tourists, Zubayr Hamza top-scored with 62.

Following on, there was no respite for the visitors as it was Shami who once again looked in lethal rhythm. He clean-bowled Hamza (0) first and then trapped skipper Faf du Plessis (4) in front as the score read 18/3. But the pacer wasn't done and then sent back du Plessis' 'toss proxy' Temba Bavuma for a duck, caught behind by wicketkeeper Wriddhiman Saha.

But the slide was started by Umesh when he sent opener Quinton de Kock's off-stump cartwheeling with a beauty as the Proteas T20I skipper played inside the line of the ball. At the tea break, South Africa were 26/4.

In the morning session, the tourists had the worst possible start as they lost skipper du Plessis to a peach of a delivery by Umesh. Overnight-batsman Hamza, however, opted for counter-attacking technique thereafter and along with Bavuma, scored freely and made sure the visitors didn't succumb to the pressure applied by the Indian bowlers.

Both Hamza and Bavuma collected boundaries at regular interval and kept the scoreboard moving. During the 91-run partnership, the 24-year-old Hamza went to score his maiden Test 50.

However, just when South Africa were looking like getting back into the game, Jadeja bowled a ripper to get past the bat of Hamza and brought an end to his 62-run knock. Bavuma didn't stay long at the crease thereafter and became the first international scalp of debutant Shahbaz Nadeem at his individual score of 32.

Wicketkeeper Heinrich Klaasen, who came in next, didn't trouble the scorers much and was bowled by Jadeja after contributing with six runs to South Africa total.