Ranchi, Oct 21: After a fiery burst from the pacers, Indian spinners, particularly Ravindra Jadeja, came to the party and piled further misery on South Africa to put the hosts into a commanding position in the ongoing third and final Test at the JSCA Stadium here on Monday. 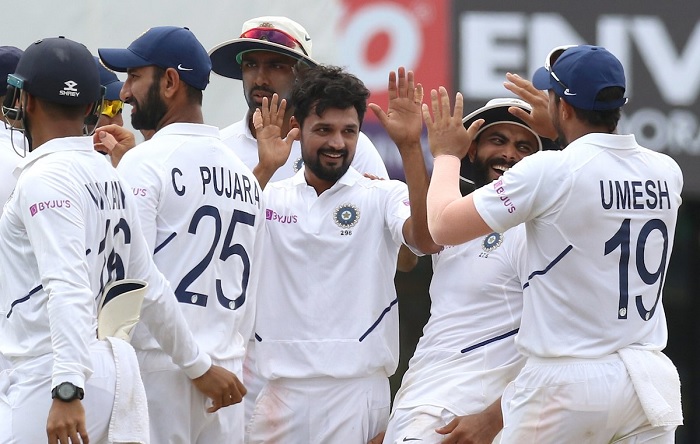 At Lunch on Day 3, South Africa's scoreboard read 129/6 with George Linde and Dane Piedt batting on 10 and 4, respectively. The visitors, who added 120 runs in the morning session, still trail by 368 runs.

Resuming at 9/2, the Proteas had the worst possible start as they lost skipper Faf du Plessis to a peach of a delivery by Umesh Yadav. The ball pitching on middle-stump line, moved just a little to get past du Plessis' bat and hit the top of the off stump.

Overnight-batsman Zubayr Hamza, however, opted for counter-attacking technique thereafter and along with Temba Bavuma, scored freely and made sure the visitors didn't succumb to the pressure applied by the Indian bowlers.

Both Hamza and Bavuma collected boundaries at regular interval and kept the scoreboard moving.

During the 91-run partnership, the 24-year-old Hamza went to score his maiden Test 50.

However, just when South Africa were looking like getting back into the game, Jadeja bowled a ripper to get past the bat of Hamza and brought an end to his 62-run knock. Bavuma didn't stay long at the crease thereafter and became the first international scalp of debutant Shahbaz Nadeem at his individual score of 32.

Wicketkeeper Heinrich Klaasen, who came in next, didn't trouble the scorers much and was bowled by Jadeja after contributing with six runs to South Africa total.

Earlier on Sunday, India had declared their innings on 497/9 and had picked the wickets of both the South African openers before play was stopped because of bad light.