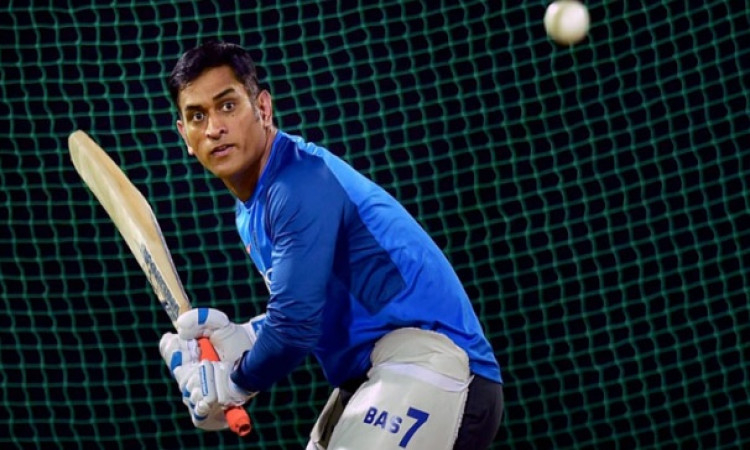 May 21 (CRICKETNMORE) He might be one of the senior-most members in this Indian team that heads to the 2019 World Cup on Wednesday, but M.S. Dhoni is undoubtedly one of the fittest in the team. In fact, the former India skipper beating Hardik Pandya in a 100-m dash in December 2017 is a video that is still etched in every cricket fan's mind. And at 37, he is only getting leaner and fitter.

In fact, this Indian team under skipper Virat Kohli has turned a new leaf when it comes to fitness. While Kohli himself attributes his amazing run on the international scene in the last few seasons to a healthy and fit lifestyle, some of the other Indian players have also given due importance to fitness under the watchful eyes of Team India trainer Shankar Basu. And the Yo-Yo Test has now become a yardstick for selection to the national team.

Dhoni, though, has his own fitness regime and isn't much of a power lifter like skipper Kohli. In fact two people who deserve credit for Dhoni's ability to remain one of the fittest even at this age are former India trainer Ramji Srinivasan and Gregory Allen King. The latter also works as fitness trainer for Chennai Super Kings.

Speaking to IANS, sources in the know of things said that while Dhoni is a natural, he consults the duo when it comes to drawing up a fitness chart or workout routine.

"MS is a natural to be honest. The energy that he has shown over the years and his fitness level even when the rest of the Indian players weren't this focused on the area speaks volumes of his knowledge about staying fit and the requirements of a professional cricketer. Also, his love for the military forces is well known and he has closely followed their lifestyle. So, in a way, he also has a disciplined routine.

"This apart, when he does need any guidance, he goes to Ramji and Gregory and the two coordinate to chart out what is best for the former India skipper. He likes to keep things simple and unlike some of the other Indian players, he doesn't do clean-and-jerk or powerlifting. He would rather focus on doing core strengthening exercises and fine-tune his boxing skills. Basically, he likes to work on those areas that help him during the game," the source explained.

When contacted, Ramji refused to comment on the matter.

The World Cup starts in less than 10 days and with the showpiece event going back to the round-robin format, like in 1992, the 10 teams will play each other once in the group stages before the top four teams move into the semi-finals. Apart from the high-intensity battle between bat and ball, the fitness of the players will also be in focus and Dhoni will once again lead the show along with Kohli when it comes to being the fittest players in this Indian team.