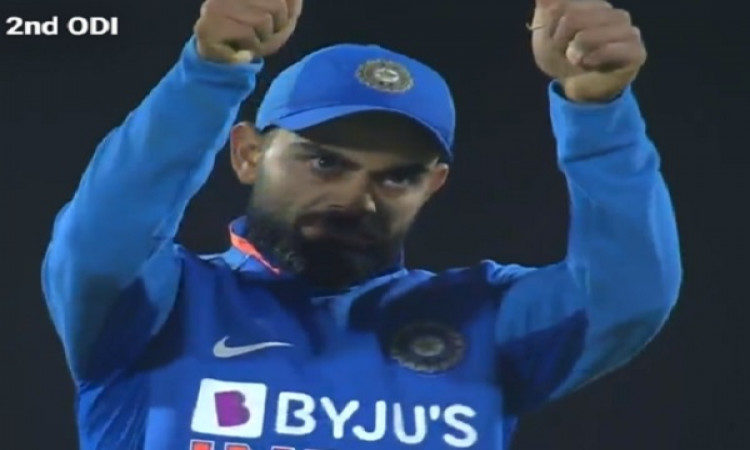 Rajkot, Jan 18. India captain Virat Kohli said on Friday that K.L. Rahul's innings in the second ODI against Australia was his best at the international level thus far.

Also Read: Rohit fine, should be back for Bengaluru ODI: Kohli

Kohli reverted to his usual No. 3 position on Friday after demoting himself to No. 4 in the first ODI on Tuesday which India lost by 10 wickets.

"We live in the days of social media and the panic button was pressed too early," Kohli said about the response to his decision to demote himself in the first ODI.

"It's important to not leave someone like KL out. You saw how he batted today. This is probably the best he's played at the international level. The knock showed maturity and class, and we know exactly what we're doing in the dressing room," Kohli said in the post-match presentation ceremony.

Rahul was also effective behind the stumps, taking two catches and effecting the dismissal of Australia captain Aaron Finch with a sharp stumping.

"When you are playing well, it seeps through into your other skills as well. KL keeping like that certainly gives us another option to think about. He is becoming a multi-dimensional player, and it's really great when players step up like this," said Kohli.

The Indian captain also said that Rohit Sharma should be fit for the final ODI in Bengaluru on Sunday. Rohit sat out the last few overs of the Australian innings with what looked like a shoulder injury.

"I asked Rohit briefly just now. It's that left shoulder that has popped out a few times. There's no tear, so hopefully he should be back for the next game," he said.

Shikhar Dhawan fell four runs short of his hundred on Friday in what was his third fifty-plus score on the trot in international cricket.

"In ODI cricket, Shikhar has been one of our most consistent performers. I'm very happy that he scored runs. It always augurs well when he and Rohit score runs," said Kohli.

India levelled the three-match series with a 36-run win in Rajkot and the decisive final ODI will be played at the Chinnaswamy Stadium in Bengaluru on Sunday.

Can't wait to get back into that dressing room: Cheteshwar…