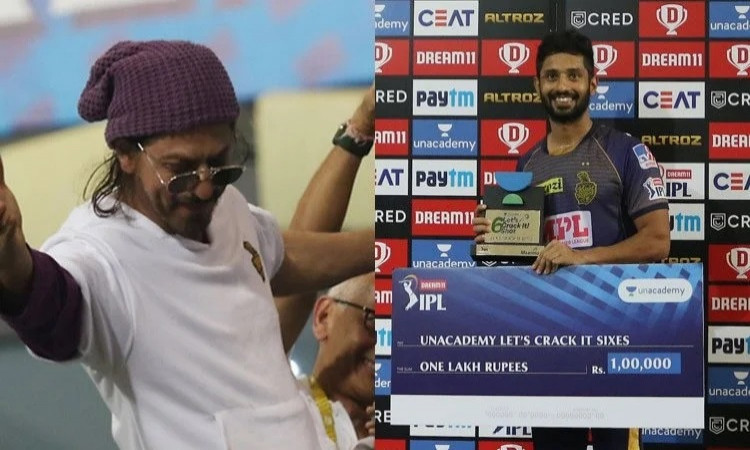 Tripathi played a crucial role in KKR's thrilling 10-run win over Chennai Super Kings at the Sheikh Zayed Stadium on Wednesday evening. It was his brilliant 81-run knock from 51 balls (8 fours, 3 sixes) that helped the Dinesh Karthik-led side post 167 in their allotted 20 overs. KKR then made a stupendous comeback in the final 10 overs to restrict MS Dhoni's men to 157 in their full quota of overs, which helped them earn their third win of the tournament.

Following his heroics with the bat, Tripathi also got an opportunity to meet franchise owner and one of Bollywood's megastar Shah Rukh Khan.

Tripathi was adjudged the Player of the Match and when he walked up to collect the award, Shah Rukh shouted his iconic dialogue: "Rahul, naam toh suna hi hoga," even as presenter Harsha Bhogle and the KKR batsman himself burst into laughter.

After the win, 'King Khan' also praised his boys and in particular Tripathi. "We were a few runs short, but the bowling made up for it at the end. Well played boys of Kolkata Knight Riders. And have to mention our Rahul Tripathi 'Naam toh suna tha....kaam usse bhi kamaal hai'. Be healthy all of you and rest well. Brendon McCullum will see you soon," he tweeted.

For the unversed, 'Rahul' is one of the most-used on-screen names for SRK's character in his Bollywood career. The dialogue 'Rahul, naam toh suna hi hoga' was first used in his Bollywood flick 'Dil Toh Pagal Hai' released in 1997.