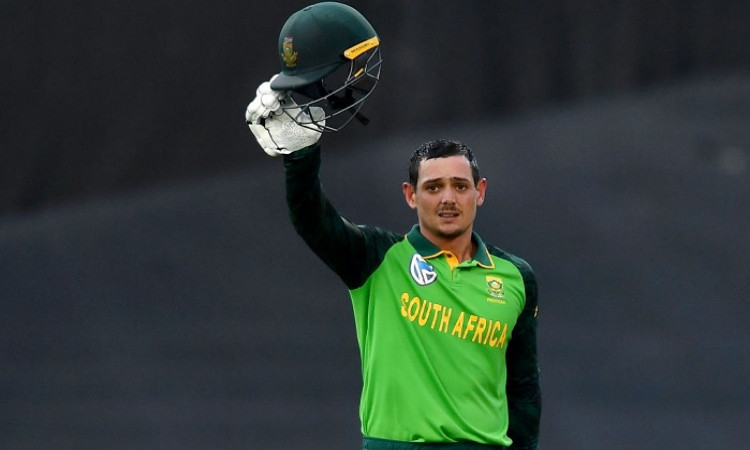 Cape Town, Feb 5: Quinton de Kock played a captain's knock as he guided South Africa to a comfortable seven-wicket win over England in the first ODI of the three-match series.

Chasing 259, the Proteas rode on brilliant innings from de Kock (107) and Temba Bavuma (98) who enjoyed a 173-run second-wicket stand at the Newlands on Tuesday to inflict England a loss in their first ODI they were playing since the successful 2019 World Cup.

While the skipper scored 11 boundaries and a six in his fluent 113-ball knock, Bavuma smashed five fours and two sixes throughout the 103 deliveries he faced. Unfortunately, 29-year-old Bavuma just fell two runs short of a second ODI century as Chris Jordan skidded a ball through to trap him on his crease.

It turned out to be a special occasion for de Kock who passed 5,000 ODI runs on his way to his 15th ODI century.

Rassie van der Dussen (38*) and JJ Smuts (7*) then completed the formalities as the hosts went across the line with 14 balls to spare.

Earlier, Joe Denly's first ODI half-century since 2009 anchored England's total of 258/8 as the visitors let go of the formidable start provided by the experienced duo of Jason Roy and Jonny Bairstow.

Both had threatened to put on one of their typically bulldozing opening stands, but Roy's dismissal for 32 prompted a mini-collapse. From 51/0 England crumbled to 83/4, with the 16th over, bowled by Tabraiz Shamsi, containing two wickets.

However, Denly (87) kept his composure and stitched crucial partnerships with Chris Woakes (40) and Tom Curran (15*) down the order. In Woakes in particular -- who was playing his 100th ODI -- Denly found the right partner, and the pair put on 89. In the end, they were able to take the reigning world champions to a respectable total which in the end didn't turn out to be enough.

The two teams will now face each other in the second match on Friday at Kingsmead, Durban.