Pune, Jan 11:  India beat Sri Lanka by 78 runs in the third and final T20I at the Maharashtra Cricket Association Stadium here on Friday to seal a 2-0 series win. 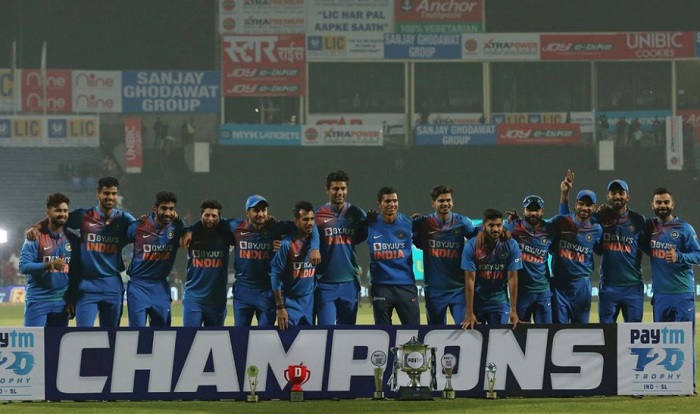 In what turned out to be a good all-round effort, India made 201/6 after being put into bat before dismissing Sri Lanka for 123 to complete the comprehensive win.

India seemed to have left behind the ghosts of the last few games in which their fielding was found wanting. The bowlers and fielders combined to stifle Sri Lanka for runs and ensured that the visitors never looked capable of posing a challenge.

Jasprit Bumrah got opener Danushka Gunathilaka in the very first over when the latter pulled a short delivery straight to Washington Sundar at mid-on. Gunathilaka's opening partner Avishka Fernando went three balls later, holing out to Shreyas Iyer at cover off Shardul Thakur.

Oshada Fernando had to walk back after an alert Manish Pandey caught him short of crease with a direct throw from point. Kusal Perera was castled by Navdeep Saini with a yorker that took out his middle stump, as Sri Lanka lost four wickets inside the Powerplay.

For the next six overs, Angelo Mathews, playing his first T20I since August 2018, and Dhananjaya de Silva gave Sri Lanka a faint hope of staging an unlikely comeback. The pair put up 68 runs for the fifth wicket and momentarily pegged back the Indian bowlers.

However, Mathews soon fell trying a big shot with Washington Sundar inviting him with a wide delivery outside off. Mathews couldn't quite connect and ended up being caught by Pandey at long-on.

It was another downward spiral for Sri Lanka from there on as India turned the screws. Yuzvendra Chahal ran out Wanindu Hasaranga with a brilliant piece of fielding at mid-off while Dashun Shanaka was caught and bowled by Thakur. Lakshan Sandakan was stumped off Sundar.

Dhananjaya de Silva was the only positive light for Sri Lanka as he managed to get a masterful half-century. He was dismissed for 57 by Saini, who also got the last wicket of Sri Lanka skipper Lasith Malinga, with the latter's counterpart Virat Kohli taking the catch.

Earlier, a late flourish by Pandey and Thakur and a 97-run opening stand between Shikhar Dhawan and K.L. Rahul helped India go past the 200-run mark. While the openers ensured that India didn't lose a wicket in the first 10 overs, Lakshan Sandakan led the effort as Sri Lanka took four wickets between the 10th and the 13th.