Karachi Kings paid rich tribute to their late head coach Dean Jones of Australia before the start of playoffs of the Pakistan Super League (PSL) here on Saturday. Multan Sultans players joined their Karachi Kings counterparts in paying the tribute. 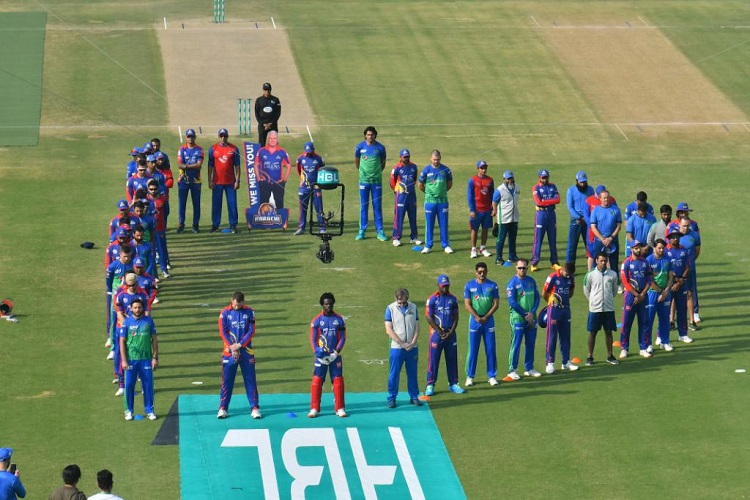 Jones, a former Australia Test batsman, died of a cardiac arrest, aged 59 years and 184 days, on September 24 in Mumbai while on a professional assignment.

The players and coaching staff of Karachi Kings and Multan Sultans formed a 'D' and placed a life-size cut out of Jones in the middle, with the words 'We Miss Your' printed on it while the digital scoreboard displayed the words 'Forever in our hearts, Deano!'

A top order batsman, Jones, who was part of the second Tied Test in which he scored his maiden double century in 1986 in Madras, played 52 Tests and 164 ODIs between 1984 and 1994. He was a gutsy batsman and wasn't scared of stepping out to play speedsters. His running between the wickets was very brisk.

Jones is perhaps best known for his 210 in the Tied Test, his maiden double century at that level -- an innings after which he was taken to a hospital and was put on a saline drip after he was dehydrated during his eight-and-a-half hours at the crease in hot and humid Madras, as Chennai was then called.

"A day that changed my life forever," Jones tweeted on September 19, on the 34th anniversary of the Tied Test. Another tweet of his that day read: "This Test was the Renaissance for Australian cricket. It was our Mt Everest moment. Under AB [Border] we started to believe that we can compete against the best. Great friendships started with the Indians. Our Journey had just begun!"