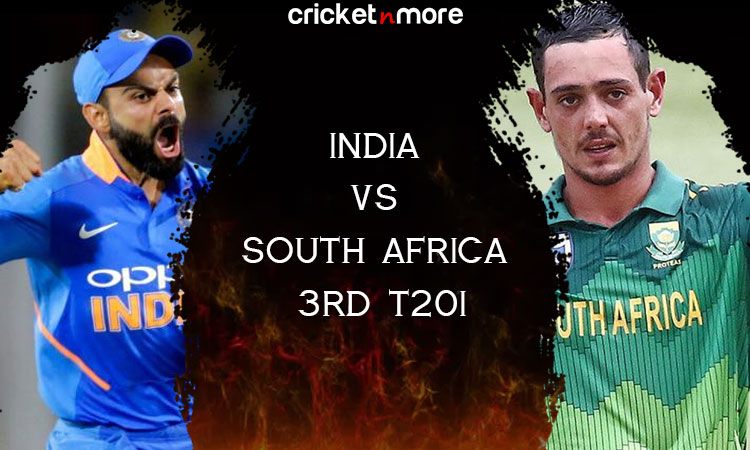 Bengaluru, Sep 2:  After a commanding performance in Mohali, Team India will aim to seal the three-match series when they enter the M.Chinnaswamy Stadium for the third and final T20I against South Africa on Sunday.

With a washout in the first game in Dharamsala, both the teams were looking to take the upper hand and take an unassailable lead in the series in Mohali. However, it was the Men in Blue who took command at the I.S. Bindra P.C.A. Stadium and came out with a brilliant performance to secure a rather comformtable win.

Deepak Chahar and Virat Kohli turned out to be the standout performers in Mohali as India cruised to a seven-wicket win against the young Proteas side led by Quinton de Kock.

Team India ticked almost all boxes in Mohali where they first restricted the visitors to 149 and then chased down the target riding on their skipper Kohli's unbeaten 72.

However, one area of concern -- which has now been looming over the team -- will be the form of wicketkeeper-batsman Rishabh Pant and he will again be in focus in Bengaluru.

Pant, who has been warned by head coach Ravi Shastri and batting coach Vikram Rathour about playing careless cricket, threw away his wicket cheaply and missed out on an opportunity to showcase his talent, which everyone speaks of very highly in Mohali.

On Friday, former India captain and NCA head Rahul Dravid spent some time with the Indian players during the practice session and offered some piece of advice to all of them, especially Pant.

For the hosts, it will be a case of continuing with the performance they have been delivering in the recent times. Their batting looks in total control, so is there bowling and fielding.

Proteas, on the other hand, will have their task cut out. In order to level the series, the mantra for them is actually quite simple: score enough runs, i.e. in excess of 180 and give their bowlers something on the Chinnaswamy pitch which historically has been a high-scoring ground.

Big hitters like David Miller, Dwaine Pretorius and de Kock need to fire from the word go. Only then can the visitors pose a challenge against the hosts.