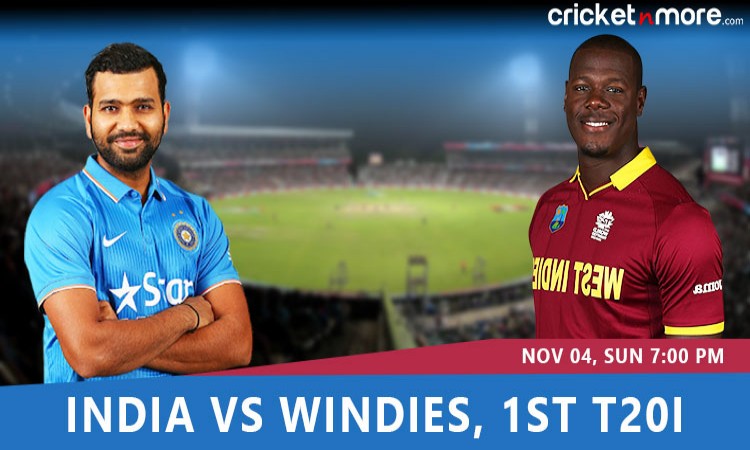 Kolkata, Nov 3 (CRICKETNMORE): Sans the towering presence of Mahendra Singh Dhoni, Rohit Sharma will lead an Indian team brimming with confidence against the West Indies in the first of the three T20 Internationals here at the Eden Gardens on Sunday.

Dhoni has been left out of India's T20 squad for the home series against West Indies and, more significantly, India's tour of Australia.

Although according to regular skipper Virat Kohli, who has also opted out of the series, Dhoni remains an integral part of India's plans, it is widely believed that the 37-year old is being phased out owing to his poor run since the turn of the year.

Besides leading India to their maiden and only T20 World Cup triumph in 2007, Dhoni is also the most capped player in the shortest format, featuring in 93 of India's 104 matches.

The emergence of young wicketkeeper-batsman Rishabh Pant has added to the problem with the 21-year old claiming a place in the side in all the three formats.

Coming to the T20 games, India will start as favourites after cantering to a 3-1 ODI series win and two test victories prior to that.

The Windies are a different team when it comes to T20s, with the likes of Keiron Pollard, Andre Russell, skipper Carlos Brathwaite, Dareen Bravo and latest sensation Shimron Hetmyer in their ranks.

It is a different matter that the current world champions have not had a great year even in this format. The Windies have won only twice -- the victory against ICC World XI included -- in 2018, losing two games to Bangladesh in their last couple of encounters.

In Tests, they were no match to India with the rubbers ending in three days, and while there was some hope in the ODIs, the tourists crumbled sensationally in the last two matches after posting an impressive win in the third game.

The Indian team has been on a roll at home for quite some time and against a weakened Windies have looked invincible for most parts of the series.

Keeping in mind the World T20 in 2020, India have picked three uncapped players (Krunal Pandya, S Nadeem and Khaleel Ahmed) for this and the Australia series, aside from bringing back the likes of Shreyas Iyer and Washington Sundar to the squad.

The hosts would want skipper Rohit to lead from the front and continue his purple patch with the bat. The seasoned Mumbai batsman was the second highest scorer behind Kohli, scoring 389 runs at 129.66, that included two hundreds.

Besides, Eden is also a happy hunting ground for Rohit. The 31-year old has a world record score of 264 in ODIs here in 2014, a Test ton (177) and two IPL titles won on this ground. The classy opener also made his first-class debut at Eden and got his first IPL ton here.

The three matches will also give another opportunity to young pacer Khaleel Ahmed who drew a lot of praise from skipper Kohli and coach Ravi Shastri during the ODIs.

The tourists will depend on their famed T20 specialists who play in different leagues across the globe to come good.

Hetmyer, 21, is also in superb form scoring 259 runs in the ODI series including the counter-attacking 106 in Guwahati.

Captain Brathwaite, who famously clubbed four consecutive sixes off Ben Stokes to win the World Cup here two years ago, will also be counted on as a match winner for the side missing the services of talisman Chris Gayle who declined selection. Mystery spinner Sunil Narine is also absent.

The Windies will also miss offie Ashley Nurse who picked up an injury during the ODIs and has been ruled out. The Eden track promises a run feast with a bit of grass on the surface affording even bounce and the ball expected to come on to the bat nicely.

West Indies lead India 5-2 in the eight matches they have played so far.