Preview: India aim for series-win against WI in Thiruvananthapuram 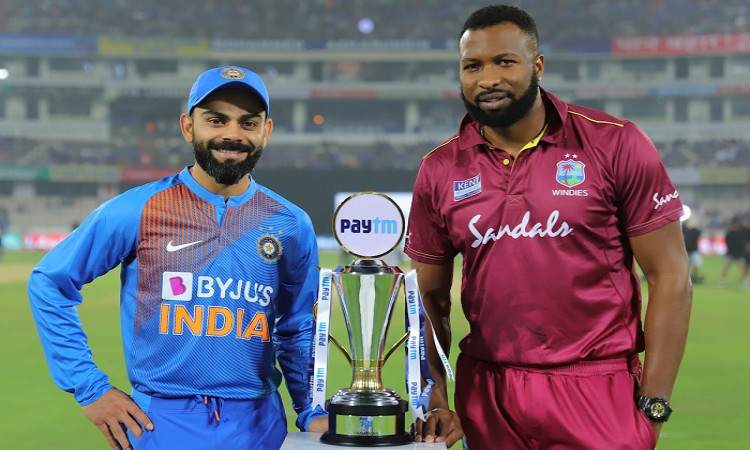 Thiruvananthapuram, Dec 7:  After registering a stunning victory in Hyderabad, Team India will aim to seal the three-match series when they take on the West Indies in the second T20I at the Greenfield Stadium on Sunday.

On Friday evening, India, riding a brilliant knock from skipper Virat Kohli, registered their highest-ever successful run-chase in T20Is as they chased down the 208-run target with six wickets in hand.

Kohli finished on 94 not out from just 50 balls to stun West Indies, after the visitors had looked set for victory. K.L. Rahul also contributed with a valuable 62 and provided the team with the much-needed fire power at the top of the order.

The Indian skipper would be impressed with the way his players performed with the bat. However, the hosts were sloppy in the other two departments and they would desperately hope that they come out with improved performances in bowling and fielding in Thiruvananthapuram.

The hosts dropped many catches and were found wanting on the field -- something which they would want to improve in the second T20I. On the other hand, the visitors -- as Kieron Pollard said after their defeat in Hyderabad -- need to improve their bowling.

West Indies scored 207/5, but India managed to chase it down with eight balls to spare. Evin Lewis kicked things off with a 17-ball 40, while Brandon King hit a useful 31. Shimron Hetmyer top-scored with a half-century, while power came in the form of Pollard (37 from 19) and Jason Holder (24 from 9).

"208 to defend, on any day you'd take that 10 out of 10 times. Where we lost the game was the extras and our bowling. Our execution was poor. If we had executed the plans we had spoken about, it would have been a different scenario despite the good batting wicket," said Pollard and that's exactly what the visitors need to do to make a comeback in the series.

Pitch curator Biju had already stated the fans can expect another run-fest at the Greenfield Stadium.

"This is going to be a pitch where lots of runs can be expected. Even with likely rains, the pitch will favour the batsmen," said Biju.