Karachi, Dec 23:  As Pakistan on Monday thrashed Sri Lanka by a huge margin of 263 runs in the Karachi Test to win the historic two-match series 1-0, an elated home side skipper Azhar Ali hailed both his bowlers and batsmen for stepping up in their respective departments to hand the Green Brigade a much needed series win. 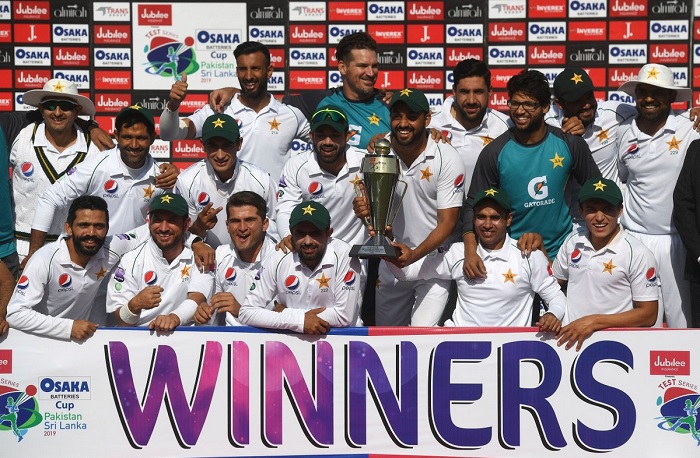 The series also marked the return of Test cricket to Pakistan after 10 years as Sri Lanka were the last team to play Tests there, in 2009, when their tour was cut short by an attack on the team bus.

Speaking after the match, Azhar said: "The last year has been tough for us as a Test team and playing at home after a long time was emotional for us, but we wanted to start fresh on a positive note. And it has been satisfactory. There is so much talent in these youngsters, obviously experience will come with time."

"They are the best bowlers in Pakistan and we have to back them, Abbas came back strong and Shaheen kept asking for the ball to get his fifer. The platform was laid by the openers for us then. Centuries are very important, but Babar and Asad got important fifties in the first innings. And then Naseem was outstanding," he added.

Meanwhile, the Pakistan skipper also thanked the islanders for paying a visit to their country and said: "Definitely we needed this performance. A big thank you to the Sri Lankan team from the bottom of our hearts; they don't know how much happiness they have given us by playing here at home after so long."

On the other hand, Sri Lanka captain Dimuth Karunaratne felt their opponents made a strong comeback in the contest and lack of patience from his team cost them the match.

"I thought we did really well in the first two days. But Azhar and his team came back strongly and put us under pressure. We lost our patience as well and in Test cricket we need to be patient. But they outplayed us," the Lankan skipper expressed.

"A lead of 80 was really good, but we bowled a lot of loose balls. We were under pressure and they were scoring around ten in an over and couldn't come back. They dominated after that," he added.

Earlier, the first Test of the series had resulted in a draw as continous rain and bad weather had washed out almost four days of play in Rawalpindi.