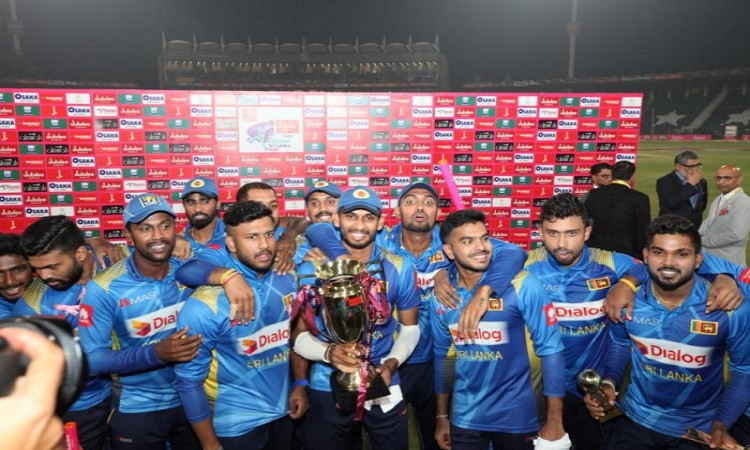 Lahore, Oct 10: Playing sans many of their big stars, Sri Lanka beat Pakistan by 13 runs in the third and final T20 international here on Wednesday to complete a 3-0 whitewash of the top-ranked T20 side in the world.

Batting first, Sri Lanka set the hosts a target of 148. But Pakistan lost their first wicket off the very first ball of the innings with Kasun Rajitha deceiving Fakhar Zaman with an inswinger that hit the batsman's thigh and then took the stumps.

Babar Azam and Haris Sohail survived the next 11 overs but struggled to increase the scoring rate. Babar finally fell for a 32-ball 27 to Lahiru Kumara off the last ball of the 12th over. Wanindu Hasaranga then dismissed Haris Sohail for 52 off 50 balls in the 16th over with the scoreboard reading 94/3.

Imad Wasim tried to give the chase an impetus, but ended up holing out to Kumara at long-on off Hasaranga. The leg-spinner then took the wickets of Pakistan skipper Sarfaraz Ahmed and Asif Ali as Sri Lanka restricted the hosts to 134/6.

Earlier, Mohammad Amir and Imad Wasim ran through the Sri Lankan top order before Oshada Fernando's belligerent 78 off 48 balls bailed Sri Lanka out and gave them a competitive total.