New Delhi, Dec 5 (Cricketnmore) Pacer Mohammed Shami, who left the field after vomiting on the fourth day of the third and final Test, is fine and will play on the final day against Sri Lanka here on Wednesday, India batsman Shikhar Dhawan said on Tuesday. 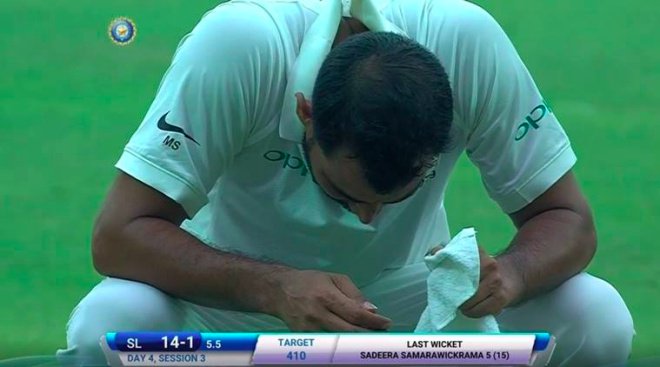 Shami appeared to be struggling after bowling three overs. His reaction was similar to Sri Lankan seamers Suranga Lakmal and Lahiru Gamage.

After throwing up, Shami walked off the ground after consultation with the physio amid concerns over poor air quality.

With India reducing Sri Lanka to 3/31 at stumps after setting a target of 410 runs on the fourth day and with three sessions left in the game, Shami is vital to the team since Virat Kohli has only four specialist bowlers in the team.

"Shami is fine. You will see him in action tomorrow," Dhawan told the media after the end of play.

Dhawan said the air pollution was not a major issue but admitted that the Sri Lankans may have been troubled by the poor air quality.

In the earlier press meets, India had claimed that the Sri Lankans were using delaying tactics and not focussing on cricket.

"We have so many players who are not from Delhi. But we as a group have a job on our hand. Of course there is high pollution in Delhi. (But) it is our responsibility to play and focus on cricket," said the left-handed batsman who belongs to Delhi.

"Probably they (Sri Lankans) may be feeling it. There are so many beaches in Sri Lanka and pollution level is less in places where there are beaches," he added.

In the morning session, Sri Lanka were bowled out for 373 in their first innings, conceding a lead of 163 runs to India. India declared their second innings at 246/5, setting a target of 410.

Dhananjay De Silva (13 not out) and Angelo Mathews (0 not out) were at the crease when the umpires called it a day, with Sri Lanka 379 behind the target.

"We will try our best to go for the win tomorrow. Pressure is on them," Dhawan said.