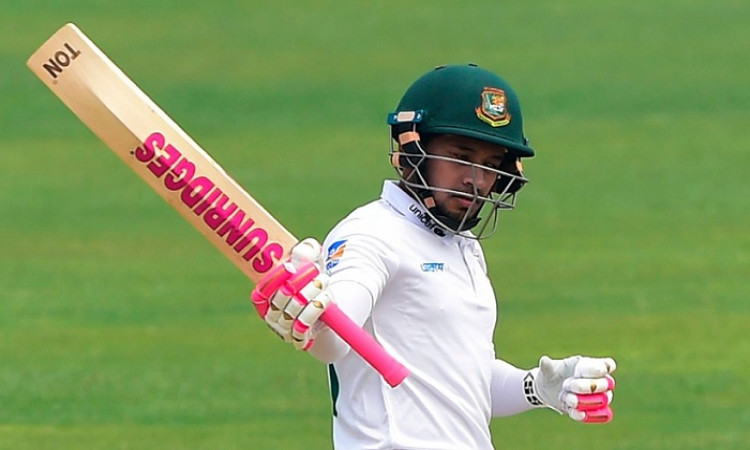 Dhaka, Feb 24:  Mushfiqur Rahim cracked his third Test double-century as Bangladesh bossed over Zimbabwe on the third day of the one-off Test here on Monday.

The hosts declared at 560/6, shortly after Rahim (203 off 318 balls) reached his double century. Rahim in the process became the highest run-scorer for Bangladesh in Test cricket with 4,412 runs, seven more than Tamim Iqbal's tally of 4,405 runs.

Zimbabwe were then reduced to 9/2 by stumps, trailing by 286 runs, with Nayeem Hasan dismissing Prince Masvaure and Donald Tripano for nought in the opening over.

Resuming the day on 240/3 with Mominul Haque on 79 and Rahim on 32, Bangladesh continued to dictate the game. The pair added 154 more runs before Mominul was dismissed for a 234-ball 132.

However, Mushfiqur carried on, determined to reach his second double-century against Zimbabwe. There was more joy for Zimbabwe when Mohammad Mithun was sent back for just 17, but they once again had to chase plenty of leather after Liton Das walked in.

Das sealed up one end and scored a half-century, even as Mushfiqur accelerated at the other end. They added a further 111 runs for the fifth wicket, swelling Bangladesh's lead.

In the five overs remaining in the day, Zimbabwe were reduced to 0/2 within an over, with both Masvaure and Tripano being dismissed for nought by off-spinner Nayeem.

He first bowled Masvaure through the gates, deceiving him with subtle turn, and then induced an edge off Tripano that was caught behind the stumps by Rahim.

Kevin Kasuza and Brendan Taylor then managed to hang around until stumps. If Zimbabwe are to get anything out of this match, they will have to bat their hearts out on the fourth day.