New Delhi, June 13: Australia and South Africa have played some of the most memorable encounters in ODI cricket. While the match that would pop into most fans' minds between the two giants of the game would be the famous 2006 ODI at the Wanderers, there was also the 1999 World Cup semi-final which is seen as the start of South Africa's tendency to choke in big ICC tournaments. 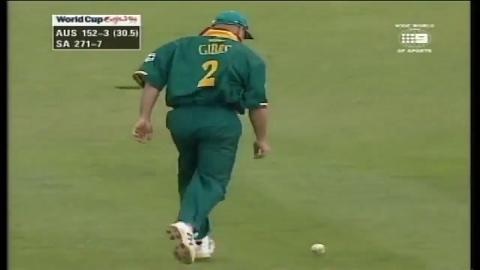 Before that match however was another thriller between the two sides in the Super Six stage. As is often the case in fiercely contested matches, it was slim margins that separated the two sides and one of these factors was Herschelle Gibbs' dropped catch that gave Australia's talismanic skipper Steve Waugh a lease of life.

Australia's chase got off to a disastrous start with Adam Gilchrist, Mark Waugh and Damien Martyn all dismissed early and Australia found themselves on 48/3. Steve Waugh was looking to resurrect the innings and while he was on 11, flicked Lance Klusener straight to Gibbs. Gibbs however went to celebrate prematurely and it was counted as a dropped catch.

Waugh would go on to score 120 in the match and, ably assisted by Ricky Ponting's 68, led his team to victory. It was this victory that was taken into consideration a few days later when the semi-final between the two teams ended up in a tie. Australia were the side that went through to the final and eventually won the tournament. "How does it feel to drop the World Cup, Herschelle?" Waugh had famously asked Gibbs after the dropped catch.

It turned out to be the first of three back to back World Cup wins for Australia and sparked a decade of dominance.

#OnThisDay in 1999, Steve Waugh benefitted from one of the most talked-about drops in the history of the game!

He went on to make a sublime 120* in a tense chase to seal a spot for Australia in the @cricketworldcup semi-final pic.twitter.com/eDhCQcFdGN