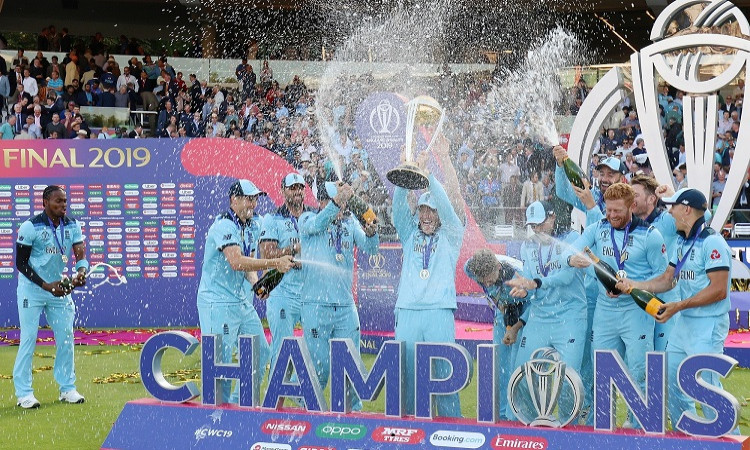 London, July 14: On July 14 last year, the entire world witnessed one of the most dramatic cricket games ever played. The World Cup 2019 summit clash between England and New Zealand at the iconic Lord's became one of the most iconic and memorable World Cup finals of all time in the history of the tournament.

England, led by Eoin Morgan, became the Men's Cricket World Cup champions after they defeated Kiwis on the account of their superior boundary count.

Opting to bat, New Zealand batters came out with a decent batting performance as knocks of 55 and 47 from Henry Nicholls and Tom Latham helped them reach 241/8 in their stipulated 50 overs.

England's chase also followed a similar fashion as at one stage, they found themselves realing at 86/4. However, Ben Stokes (84) and Jos Buttler (59) took their team to 203, without losing another wicket. When England looked sure of a victory, Jimmy Neesham and Lockie Ferguson picked up wickets to derail the chase and the visitors seemed to be in touching distance of lifting their maiden World Cup trophy. However, it was not meant to be the case.

In the final over of the game, England needed nine runs from three deliveries with Stokes at the crease and teammate Adil Rashid at the non-striker's end. The fourth delivery was hit by Stokes towards deep mid-wicket as the two batsmen scrambled for two runs.

Stokes drove full length to get inside the crease at the striker's end and that is when Martin Guptill's throw from the boundary hit his outstretched bat and went for four behind the wicket-keeper. England were awarded six runs, which in the end helped them tie the final and force the match into Super Over.

The Super Over, which was the first-ever in a World Cup final, also ended in a tie as both teams scored 15 runs each. But England's tally of 26 boundaries against New Zealand's 17 throughout the course of the game helped the hosts win the title for the first time in its history.

However, after much criticism, the International Cricket Council (ICC) had to scrap the contentious rule and said that it will no longer be used at future ICC events.