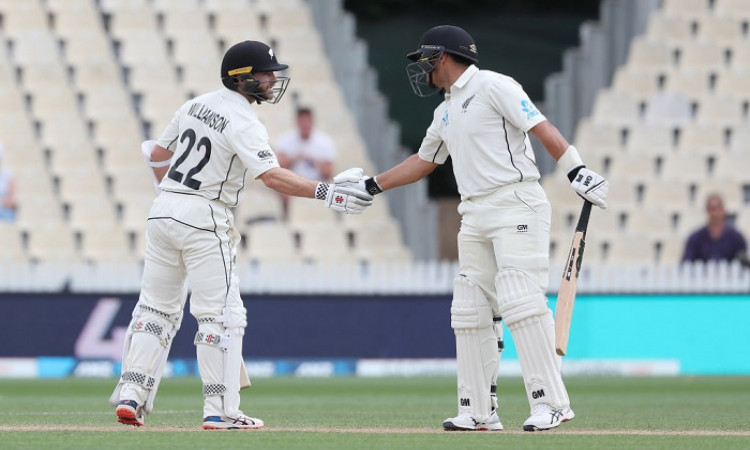 Hamilton, Dec 3: England's chances of leveling the two-match series against New Zealand spilt through their hands as rain forced Hamilton Test end in an early draw at the Seddon Park here on Tuesday.

Starting the fifth and final day trailing by five runs, New Zealand captain Kane Williamson scored his 21st test century and batting-partner Ross Taylor followed him soon after with his 19th ton in Tests as they took the hosts to 241/2 in the second session before rain - as expected - arrived and no further play was possible, forcing the umpires to abandon the play.

New Zealand had on Monday bundled England for 476 in their first innings, conceding a lead of 101 runs. The hosts didn't start their second innings on a bright note as they had lost both their openers Jeet Rawal and first innings centurion Tom Latham within the first nine overs.

However, Williamson and Taylor had made sure England didn't make any further inroads and had taken the team to 96/2 at the end of the day's play on Day Four.

Aiming to bowl Black Caps out and chase a small target before forecasted rain arrived in Tuesday afternoon, England knew they couldn't squander any opportunities. But they did -- twice -- when dropping Williamson. Wicketkeeper Ollie Pope and team-mate Joe Denly dropped simple chances and denied England with the opportunity to have a chance to draw the two-match series.

When play was called off, Williamson was unbeaten on 104 and Taylor 105 not out, with the duo adding an unbroken 213 for the third wicket partnership -- a record against England.

New Zealand had won the first Test by an innings and 65 runs at the Bay Oval.

New Zealand have just lost one Test series in the last three years and are rightly ranked number two in the longest format.

They will now head to Australia for a three-match Test series. The series will begin with a day-night game in Perth from December 12. The second Test begins on Boxing Day at the MCG and the final fixture will be played at the SCG from January 3, 2020.