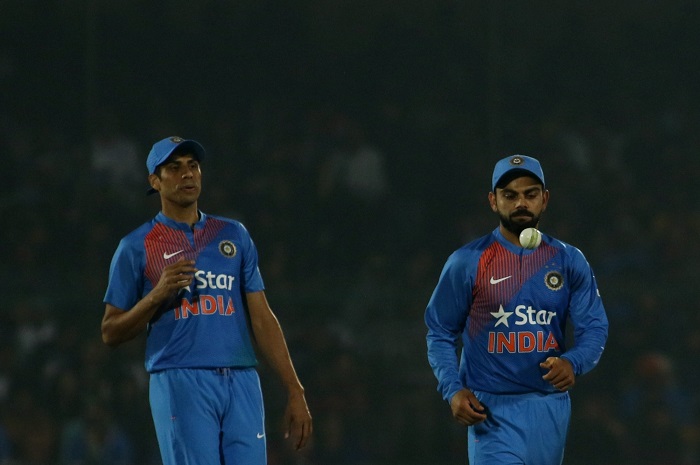 Nehra's inclusion in the 15-member squad surprised many, mostly because he is on the wrong end of his 30s and the next World T20 is a good three years away.

However, Sehwag was sure that the 38-year-old Delhi pacer still has it in him to represent the Men in Blue at the highest level.

"I was not at all surprised with Nehra's selection in the T20I team against Australia. I am very happy that he is a part of the team and I want him to play more matches in future," Sehwag told India TV on Wednesday.

Sehwag also revealed the secret behind Nehra's fitness and said that his Delhi mate has scored almost at par with captain Virat Kohli in the "yo-yo" endurance test.

The Indian team regularly undergoes a series of fitness tests with 'Yo-Yo' endurance test being the most important of them. It is an advanced version of the 'beep' test that was used by teams of earlier generations. The current Indian team is considered to be the fittest by a fair distance.

"The secret behind Nehra's fitness is when is not playing international cricket, he spends almost 8 hours in the gym (two sessions of 4 hours each). And if today he is a part of the T20 team, it is because he has passed the 'yo-yo' test. He scored almost 17-18 in the yo-yo test, touching Virat Kohli's score," he said.

"Nehra is a fast bowler and never faces any issues while running. So, he doesn't endure much problems in clearing the "yo-yo" test. Nehra likes to stay fit and spend time in the gym.

"It is not that he is doing it forcefully. He likes to run, swim and I think he would have easily covered the distance of 20 meters in the yo-yo test. He has also an advantage of his height. He is over six feet tall and has a long stride," Sehwag added.

On being quizzed about Nehra's chances to represent India at the next T20 world cup in 2020, Sehwag said: "I don't think age should be the criteria to play in the world cup. If Nehra is fit, picking up wickets and giving away less runs, then why not? Sanath Jayasuriya played till 42, Sachin Tendulkar played till the age of 40 then why not Ashish Nehra?"

Speaking on the prolonged ouster of Yuvraj Singh and Suresh Raina from the team, Sehwag said both the limited-overs stalwarts should focus on clearing the "yo-yo" test.

"We have seen in reports that many players, including Yuvraj Singh and Suresh Raina, have not cleared the yo-yo test. And probably this is the reason why they are not part of the team. I think Yuvraj and Raina should focus on clearing the yo-yo test because if they pass the test, they will be a part of the team," Sehwag said.

"Fitness is the mantra for every cricketer. If you remain fit, you will be a hit. I don't think there's any unfit player in the current Indian team."