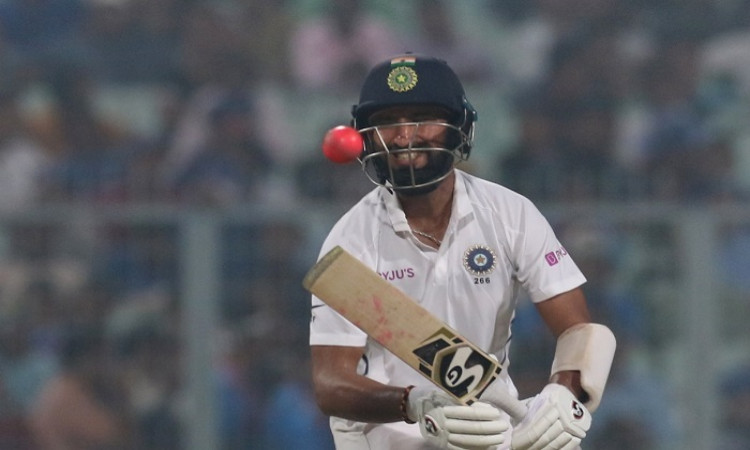 Kolkata, Nov 24: Ace batsman Cheteshwar Pujara feels that if India are to play more pink ball Tests, they need to practice more under lights. After Day 2 of the first Day-Night Test in the country at the Eden Gardens here, India stand on the brink of a series sweep as they lead Bangladesh by 89 runs with the visitors having just four wickets in hand in the second inning.

India declared on 347/9 in reply to Bangladesh's paltry 106. In the second inning, the tourists were 152/6 at stumps on the second day.

India were not ready to play Test cricket under lights but after Sourav Ganguly became the BCCI President, Virat Kohli and Co. agreed to play the second match in the two-Test series against Bangladesh under lights with the pink ball.

"It is a decision for the BCCI to make. But going forward, if we are going to play more pink ball games, we will have to practice more under lights and start getting used to it. It is not my call, so I can't say much," Pujara said at the end of the day's play when asked about India playing pink ball Tests on the road.

Asked about practice matches before an away Day-Night affair, something which skipper Kohli wants, the ace No. 3 batsman said: "If we are playing away from home, you don't have much time as you play only one of the four matches with the pink ball.

Eden Gardens witnessed 60,000 spectators on Day 1 and over 40,000 on the second day, and Pujara said that it was an encouraging sight which will boost the five-day format.

"When you're playing Test cricket and the crowd comes in, it's always motivating. Test cricket is still alive. This is an occasion which will boost Test cricket. As a player, we do enjoy such atmosphere, especially when we are fielding. The bowlers need a lot of support," said Pujara, who scored 55 in the first innings.

The Saurashtra batsman said that batting under lights was more difficult while the first session and the last one hour were relatively easier.

"Batting under lights was difficult when I batted yesterday. Even when I saw on TV, the first session is easier to bat as there are no lights. When there are lights, the ball starts swinging a little more. So it is a bit more challenging.

"The kind of experience we have, most of the Tests we played were under sunlight. So when it comes to playing under lights, it is challenging for the batsmen. Once the dew sets in, it again becomes easier to bat," he said.

Coming back to the ongoing Test, Kohli scored his 27th Test hundred, a sparkling 136, and equalled former Australian great Ricky Ponting's record of 41 international centuries as captain. With this century, Kohli's 20th as India captain in Tests, the 31-year-old also surpassed Ponting's tally of 19 Test tons as skipper.

"He batted really well. He has been scoring lot of runs in all the formats. It's always good to see him score runs and he has been very consistent in all formats. I am sure that he will be pleased with the pink ball hundred," Pujara said of his captain.

On Bangladesh players getting hit on helmets, with two of them (Liton Das and Nayeem Hasan) out with concussion already, Pujara said: "I thought light and pink ball had a role to play. As a batsman, it is not easy to pick short balls. The pace our fast bowlers have, it is not easy. Their batters haven't even played any first class match with pink ball, so it was not easy."