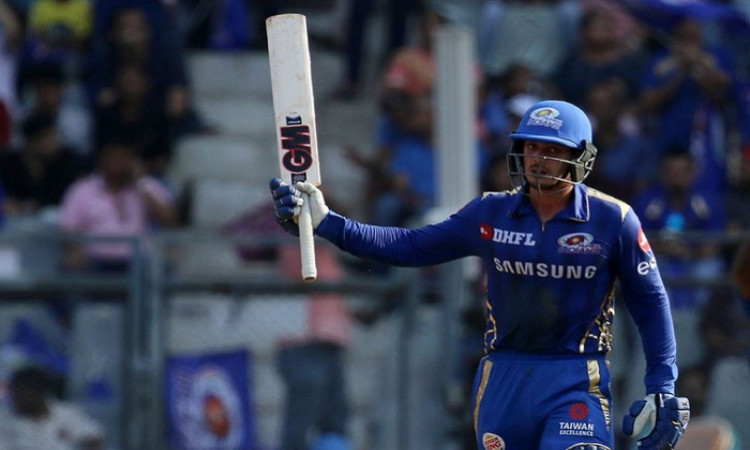 Mumbai, April 13 (CRICKETNMORE) It was a good toss to lose for Mumbai Indians (MI) at the Wankhede Stadium on Saturday as they piled up 187/5 against Rajasthan Royals (RR) after being put into bat in their Indian Premier League (IPL) clash on Saturday.

The common adage goes that morning shows the day, and the MI innings was a perfect testimony to that. With regular skipper Rohit Sharma back in the XI, he opened the batting with de Kock and the two took the Royals bowling to the cleaners from the word go.

Such was their domination that MI raced to 57 without losing a wicket in just six overs. They played smart cricket and latched onto the bad balls to ensure that the RR bowlers paid the price when they erred in length. The two were in such good form that even the otherwise economical Jofra Archer went for 12 off his first over of the game.

But Archer had something to celebrate when he dismissed Rohit for a 32-ball 47 (4x6, 6x1). Looking to up the ante after reaching a comfortable 92/0 after 10 overs, Rohit perished as he looked to hit Archer out of the park in the 11th over. Jos Buttler completed an easy catch at long-on as Sanju Samson wore the wicketkeeping gloves again.

Coming in at No.3, Suryakumar Yadav too looked to build on the strong start, but managed to score just 16 off 10 balls before Dhawal Kulkarni cleaned him up. Kieron Pollard too failed to make much of the opportunity as he was dismissed by Archer, with the batsman looking to hit the West Indies born English player out of the park.

De Kock though held fort and kept picking the timely boundaries before Archer finally dismissed him as the southpaw looked to clear the long-off boundary in the penultimate over, only to be caught by Buttler who took a brilliant running catch.

Losing wickets at regular intervals as they tried to finish with a flourish, MI managed to score 61 runs in the last five overs for the loss of three wickets.