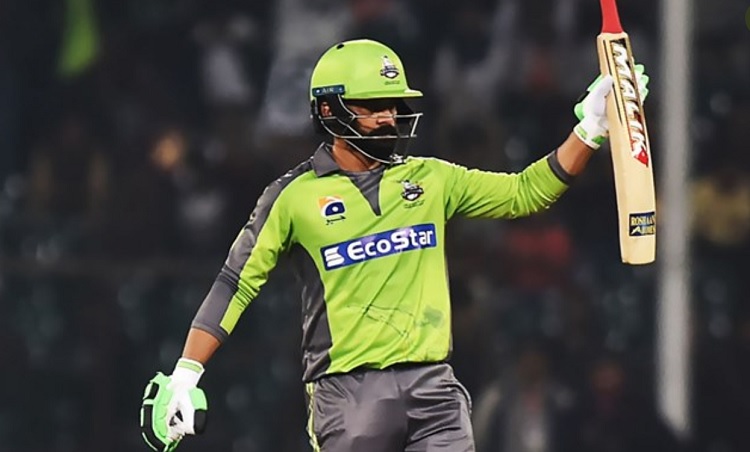 After Lahore Qalandars captain Sohail Akhtar won the toss and chose to bowl, Peshawar scored 170 for nine wickets in 20 overs, thanks to former Pakistan captain Shoaib Malik's 24-ball 39. Lahore overhauled the target on the last ball of the 19th and penultimate over after South African fast bowler David Wiese slammed Wahab Riaz for two successive sixes. The winners ended up at 171 for five wickets in 19 overs.

Batting at No.4, Hafeez (9x4s, 2x6s) took the responsibility after Lahore lost three wickets for just 33 runs inside five overs and steadied the innings. He received good support from the lower order batsmen. Ben Dunk (20), Samit Patel (20), and Wiese (16 not out off 7 balls, 2x6s) contributed crucial runs from one end while Hafeez kept the other end going.

Peshawar's speedster Saqib Mahmood was the most successful bowler of the seven used, taking three wickets, though he conceded too many runs -- 41 in four overs.

Wicket-keeper-opener Imam-ul-Haq (24) and Sohaib Maqsood (16) also couldn't do much. Then, 38-year-old Malik made a 24-ball 39 - the top score of the innings -- and South African Faf du Plessis played 24-ball 31 cameo to steady the ship somewhat.

Down the order, du Plessis's brother-in-law Hardus Viljoen, also of South Africa, blasted a 17-ball 37 to help Peshawar Zalmi to 170 for nine wickets in 20 overs.