Moeen Ali Praises Morgan For Supporting Him During Lean Patch

England all-rounder Moeen Ali heaped praise on skipper Eoin Morgan for helping him rediscover his form with the bat. Moeen struck a belligerent 61 off 33 balls in the third T20I against Pakistan on Tuesday. 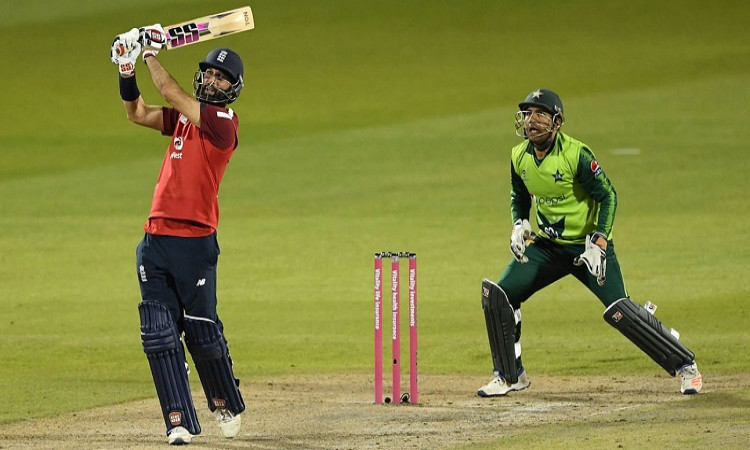 Although the innings -- Moeen's highest score in any form of international cricket since September 2017 -- was not enough to prevent England from defeat, it gave confidence to the struggling cricketer.

"It's obviously disappointing to lose, but it was nice to get some runs under my belt; the way I played was pretty pleasing," Moeen was quoted as saying by Sky Sports.

"A lot of credit will go to Morgs. He gives me responsibility, with being vice-captain and doing a team talk here and there. To have that backing from the captain, it is amazing. It's one of the reasons why he's probably the best captain I've ever had," he said.

"For me, that gives me a lot of confidence, knowing I haven't played that well over a good period of time now and for the captain to still think highly of me...it means a lot."

Mooen further said he was paying too much attention to 'outside noise'. "It has been very hard; it has been more of a mental thing," said Moeen.

"I've had to shift my mental state before this game, try and play like it was my first game for England again and be that enthusiastic kid like I was when I first played. Today was about trying to be that young kid again playing for England, getting excited before the game. You kind of lose that -- you can get sucked into the outside noise; I think I fell into that.

"I don't like making excuses for myself; sometimes I think about what other people think of me and, from now on, I'm not going to allow that to happen. It's only one game but it was nice to play well. That has to continue for me to stay in the side - I know that - and be part of England being successful again in the future," he added.