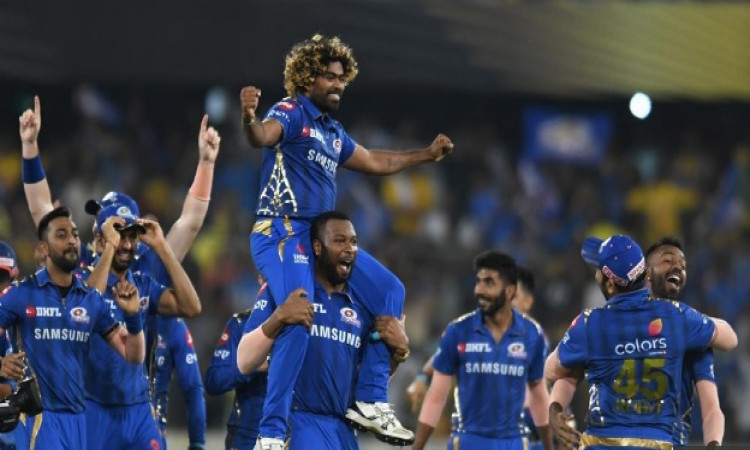 May 13 (CRICKETNMORE) Having lifted the Indian Premier League title for a record fourth time, Mumbai Indians will be celebrating with their fans in the city when they travel in an open bus from Antilia to the Hotel Trident (the team hotel) in Nariman Point via Peddar Road and Marine Drive at 6:30 pm on Monday.

The victory parade of close to six kilometers will see the Mumbai Indians players sharing their joy with the fans who are an integral part of the MI family.

MI registered a scintillating one-run win over Chennai Super Kings on Sunday when Lasith Malinga delivered the killer blow in a rip-roaring final. With two runs needed off the final ball, Malinga executed a slower yorker to perfection, trapping Shardul Thakur (2) right in front to send his teammates including skipper Rohit into delirium as Shane Watson, whose breathtaking 80 went in vain, sunk in his seat in the Chennai dugout.

Chasing a modest 150 for victory, Watson, who was dropped on 56 by Rahul Chahar, carried Chennai's hopes with a belligerent 80 off 59 balls, his innings laced with eight fours and four sixes.

But once he was run out off the fourth ball of the final over, it was Sri Lankan Malinga who showed his class to snatch the crown from the defending champions.

In the last five overs, Chennai needed 62 off 30. Watson then hit Malinga for a hattrick of fours to trim the equation to 42 off 24 balls.

There was no stopping the veteran Australian, who scored a hundred to help Chennai win the IPL last time, as he clobbered Krunal Pandya for three back-to-back sixes in the 18th over which costed Mumbai 20 runs. But it wasn't to be Chennai's night this time round.