Match Preview: India aim to bounce back in 2nd T20I amid cyclone threat 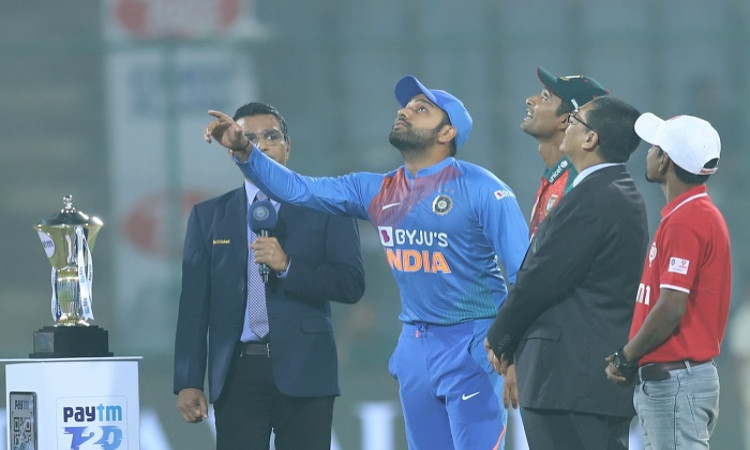 Rajkot, Nov 6:  After suffering a crushing defeat in the national capital, the young Indian team will look to bounce back when they face Bangladesh in the second T20I on Thursday at the Saurashtra Cricket Association Stadium.

Last Sunday, Bangladesh beat India by seven wickets in the series opener, chasing down a modest target of 149 with ease. It was their first victory over India in the shortest format.

For India, it will be about coming out with an improved performance in all the three departments. Their batting unit, which boasts of having the likes of Rohit Sharma, Shikhar Dhawan and Lokesh Rahul, came out with a below-par performance and could manage only 148 at the Arun Jaitley Stadium.

The bowling was also not upto the mark and apart from Yuzvendra Chahal, none of the Indian bowlers could create pressure on the Bangladeshi batsmen.

When it came to fielding, there were many glitches in that department too. In fact, the catch dropped by Krunal Pandya to hand Mushfiqur Rahim another life was one of the turning points in the game.

So, pressure is bound to be on the Indian side to make a comeback. However, Chahal has exuded confidence, saying the three-match series affords enough time to bounce back.

"There is no pressure. You know there are three matches and it's a bilateral series, not a knockout format," said the leg-spinner on Tuesday.

Meanwhile, for the visitors, it would be all about continuing with the performance they put up in the opening game amid conditions which were far from ideal for a cricket match.

The Bangladesh bowlers, particularly the spinners, kept the Indian batters in check at all times and Mahmudullah would hope they do the same in Rajkot. In batting, Soumya Sarkar and Mohammad Naim both came out with decent performances and built the foundation for Mushfiqur to unleash himself in the latter stage of the game.

"We have come here to compete in each and every game. As long as you are playing consistent cricket and improving in each game -- that is our main goal. After winning this game, we are surely looking forward to winning another game; hopefully, the next game," said Mushfiqur after the first game emphasizing on how the visitors are hoping to clinch a series win.

However, just like Delhi, the weather in Rajkot is also a concern as cyclone 'Maha' is expected to hit the Gujarat city. The cyclone is likely to hit the city on Wednesday and is expected to bring heavy rains to the city which could last till the match day.

However, the cyclone is expected to weaken on its way to the Gujarat coast, according to Skymet Weather. "The system is likely to make a landfall between Diu and Porbandar around November 7 and at that time the wind speed will be around 80-90 kmph gusting 100 kmph," said the report on the website.