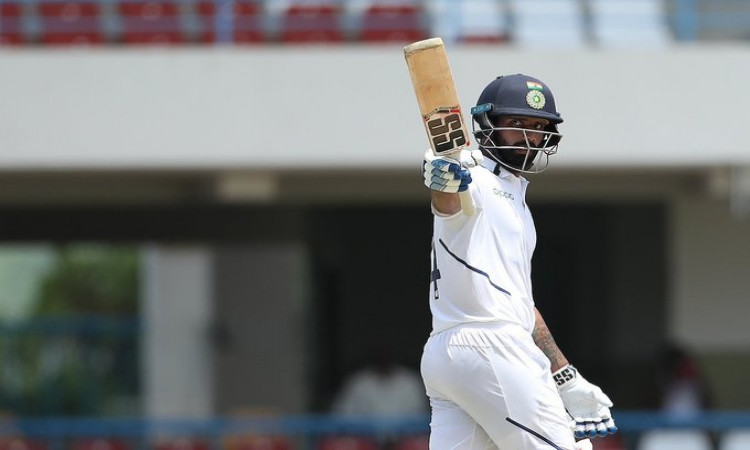 Kingston (Jamaica), Sep 3:  India's "new find" Hanuma Vihari, who emerged as the leading run-getter in the two-match Test series against the West Indies, is looking forward to play in front of the home crowd in the upcoming three-match series against South Africa beginning October 2.

Vihari, who scored 289 runs in the two Tests against the West Indies, has played all his Test matches outside India and is expected to be a part of the Playing XI when Team India takes on the Proteas at his home ground in Visakhapatnam.

"I have not played a Test at home, looking forward to it. It's great to play in front of the home crowd back in India," said Vihari who was adjudged the Player of the Match in the second Test where India thrashed the West Indies by 257 runs at the Sabina Park.

"It feels great to score my maiden Test century. I missed out on a hundred in the last match, so I was focusing on a big score this time. We were 200 for 5 and that was my goal while batting with Rishabh (Pant)," Vihari said.

"We had to be patient on this wicket as there was something in it for the fast bowlers. I was trying to take calculative risk against spinners, that was the game plan and it worked well for me," he added.

Meanwhile, India skipper Virat Kohli also praised the Andhra batsman and said: "I think the find of the series was Hanuma Vihari. The way he's batted under pressure especially, and on a much more challenging wicket here in Jamaica than in Antigua."

"I think his skill sets were outstanding. I think his temperament and technique were top-notch and he countered everything the opposition threw at him. Very, very pleased with the way he has come about.

"He's always willing to improve and is accepting of his mistakes and corrects them immediately, and he's getting the results pretty quickly. He plays with a lot of heart, always is up to do anything for the team, and that's why he invariably ends up playing crucial innings for us. It's a very young career so far, but he's shown why he's been backed and selected in this team," he added.