Looked to learn from how Virat Kohli batted with the tail, says England's Sam Curran

Birmingham, Aug 4 (CRICKETNMORE):  Young left-arm pacer Sam Curran, who starred with an all-round show to help England beat India by 31 runs in the first Test here on Saturday, revealed he tried to replicate the way Virat Kohli batted with the tail in the first innings. 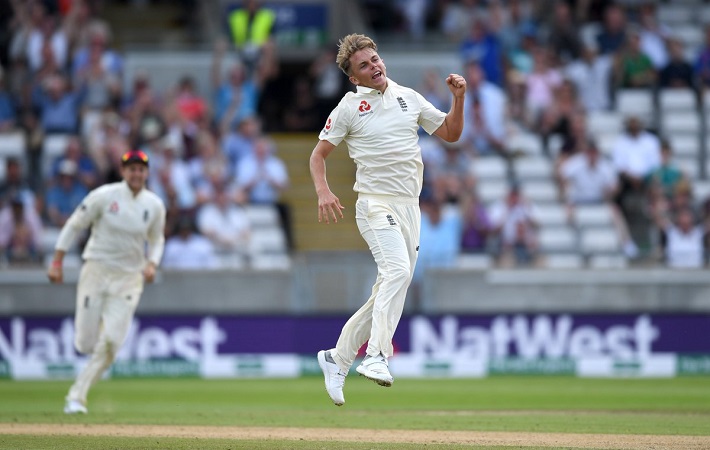 Curran came in to bat when England were reeling at 87/7 in the second innings and looked down the barrel with the visiting bowlers, especially Ishant Sharma, having their tails up.

The 20-year-old, playing only his second Test match, then struck a gritty 63 off 65 balls to take his side out of the woods, much like visiting skipper Kohli did by scoring a majestic 149 in India's first essay as all other batsmen fell around him.

"To be honest, I looked to learn from how Virat batted with the tail in the first innings," Curran said at the post-match presentation ceremony.

"I spoke to Kumar (Sangakkara) the other day in the hotel and he told me a thing or two about batting with the tail and was lucky it all came off the middle in the end," Curran added.

With the ball, Curran was superb too, returning career-best figures of 4/74 in the first dig to shave off India's topo order.

"I can't take it all at the moment. It is all very special and feels like a dream," said the Northampton-born younger brother of Tom Curran.

"Just couldn't get any sleep last night. Obviously when Jimmy (Anderson) took Karthik out first up it gave us a lot of confidence.

"Luckily for (Ben) Stokesy, he got a perfect spell this morning and changed it for us. I just try to take it like another game, but it is quite hard with the Barmy Army chanting out there, but I look to take it all in and am trying to learn in only my second game," Curran said describing the emotions during the fourth day's play when the match was on a knife's edge.

India needed 84 to win with Kohli and stumper Dinesh Karthik still at the crease while resumign the day at 110/5. But Anderson removed Karthik in the first over of the day and later Stokes got the better of Kohli and Pandya.

"This (Test cricket) is what I always wanted -- playing Test cricket in front of these big crowds, with these guys I have grown up watching and I am looking to learn everything I can from guys like Jimmy, Broad, Stokes everyday," Curran signed off.