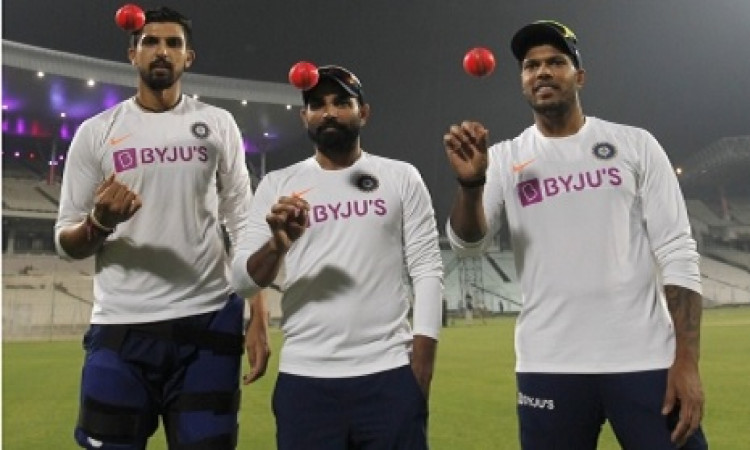 Kolkata, Nov 20  The Indian team seems to be leaving no stone unturned in order to prepare for their first ever D/N Test and it looks like the stakeholders too are putting in similar efforts to promote the affair. The Board of Control for Cricket in India (BCCI) has been tweeting images of a decked up Eden Gardens and of the mascots for the Tests for the past few days and the latest image shows India's pace trio posing with the ball.

Mohammed Shami, Ishant Sharma and Umesh Yadav posed with the pink ball in the air as they flicked it up. The pacers are expected to play a big role in the upcoming Test against Bangladesh, as they normally do when the pink ball is new.

Earlier, Virat Kohli batted throughout the twilight period and faced a lot of deliveries from Shami at the iconic stadium. All the talk has been around getting used to the "twilight zone" which cricketers who have played with the pink ball, have acknowledged to be challenging.

Many players who have played the Duleep Trophy, including Cheteshwar Pujara, have said that sighting the pink ball at twilight is a challenge as the crimson hue of the sky and the pink colour of the ball makes it look more like orange. The second Test starts on February 22.