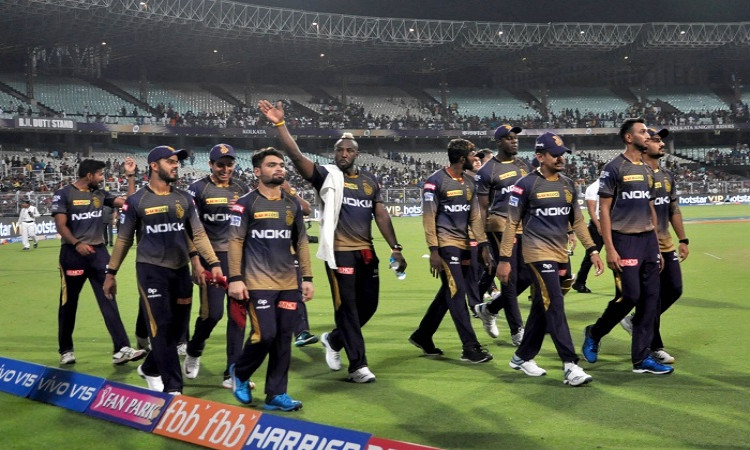 The visitors, who had not lost to KKR in their last eight meetings, were reduced to 58/4 inside nine overs with Quinton de Kock (0), Rohit Sharma (12), Evin Lewis and Surya Kumar Yadav (26) back in the hut.

Pandya then put on a show to bring up his fastest fifty off just 17 deliveries. The 25-year old World Cup bound all-rounder stitched a 63-run stand off 30 balls with Keiron Pollard (20) for the fifth wicket and then added another 64 runs in quick time with brother Krunal (24) before holing out to Russell at wide long-on off Harry Gurney.

For the home team, Russell was the pick of the bowlers returning figures of 2/25. Sunil Narine (2/44) and Harry Gurney (2/37) also picked up two wickets apiece.

This was KKR's first win over Mumbai since April 8, 2015, a result which kept Rohit and Co. waiting for a place in the playoffs with two games remaining.

Needing a victory to even dream of a berth in the playoffs, KKR were off to a flying start riding on Lynn and Gill's 96-run opening stand which came off 57 balls. Gill's chanceless knock was also his highest T20 score.

After Lynn's dismissal in the 10th over, Russell made the most of a reprieve -- he was dropped on 1 by Evin Lewis -- to remain unbeaten and blast his highest score this season with the help of six fours and eight sixes, including one off the last ball of the innings.

Russell shared a 62-run stand for the second wicket with Gill off 35 balls and then combined with skipper Karthik (15 not out) for an unbroken 74-run partnership which came off just 29 deliveries.

In the last three overs, Russell made mincemeat of Mumbai's famed bowlers Hardik, Jasrpit Bumrah and Lasith Malinga, taking 20, 15 and 20 runs off them, respectively, as the hosts plundered 55 runs in that period.

KKR were in business from the word go with Gill taking Barinder Sran for 14 runs in the first over of the innings, carting him for two fours and a six.

Lynn -- who was dropped on 18 by Keiron Pollard -- took time to get in, scoring two runs off the first seven balls before switching gears.

The Australian hit a boundary in every over after that before notching up his fourth fifty of the season in 28 balls.

Leg-spinner Rahul Chahar finally broke the partnership as Lynn holed out to Evin Lewis running in from deep mid-wicket in the 10th over as the KKR scoreboard read 97/1 at the halfway stage.

In came Russell, and for a while the Caribbean powerhouse played second fiddle to Gill, who was in full flow as he brought up his second fifty of the season off 32 balls.

Russell smashed his first six in the 13th ball of his innings, hitting Chahar for two back-to-back maximums in the 14th over.

Gill was removed by Hardik in the 16th over, with Lewis taking his catch at deep mid-wicket.

The damage was half done by then and with Russell soon breaking free, the Mumbai bowlers were taken to the cleaners as the hosts went on to pile up a mammoth total.