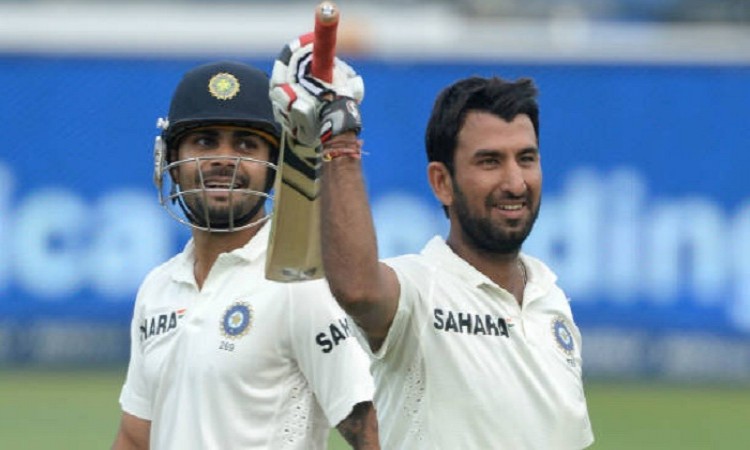 Dubai, April 4 (CRICKETNMORE) - India skipper Virat Kohli and Test specialist Cheteshwar Pujara held on to their second and seventh position respectively in the latest ICC Test Player rankings, while the biggest gainer was South African opener Aiden Markram jumping to a career-best No.9 spot in the list released here on Wednesday.

The 29-year-old Kohli had a total of 912 points, 17 points behind Australia's Steve Smith, who is comfortably placed at the top despite being banned for a year for premeditated ball-tampering attempts during the Cape Town Test against the Proteas. Pujara, on the other hand, had 810 points.

Markram, meanwhile, sustained his surge towards the top during an amazing first year in Test cricket, making his way to the ninth position among the batsmen, which also took into account performances in the drawn second Test between New Zealand and England in Christchurch.

The 23-year-old's knocks of 152 and 37 not only contributed to South Africa's massive 492-run victory over Australia in Johannesburg for a 3-1 series win but also helped him move up six places.

Markram has broken into the top 10 for the first time and is now among a select group of 10 cricketers led by Don Bradman who have scored 1,000 runs or more in their first 10 Tests.

Markram's opening partner Dean Elgar, too, has advanced after scoring 100 runs in the Test, including a knock of 81 in the second innings, while captain Faf du Plessis (up five places to 17th) and Temba Bavuma (up 12 places to 39th) are the other South Africa batsmen to make significant gains.

For Australia, captain Tim Paine has jumped eight places to 53rd position while for England, captain Joe Root moved up one place to third. Wicketkeeper Jonny Bairstow was up by three places to 13th and Mark Stoneman moved 14 places to 64th.

Among the bowlers, India Test spinner Ravichandran Ashwin slipped one place in the bowlers ranking to take the fifth position with 803 points, while Ravindra Jadeja held on to his second spot in the all-rounders ranking.

Among others, South African Vernon Philander's player of the match effort of nine for 51 has lifted him six places to third and player of the series, Kagiso Rabada, remains at the top, adding three points to take his tally to 902.

Morne Morkel, who first broke into the top 10 in January 2010, touched 800 rating points for the first time in his career and is now ranked joint-sixth along with Australia's Pat Cummins, who has risen up from 18th with nine wickets in Johannesburg.

In other movements, New Zealand's player of the match Tim Southee has moved up three places to take the 13th slot, while Stuart Broad has gained five slots to reach 12th place.