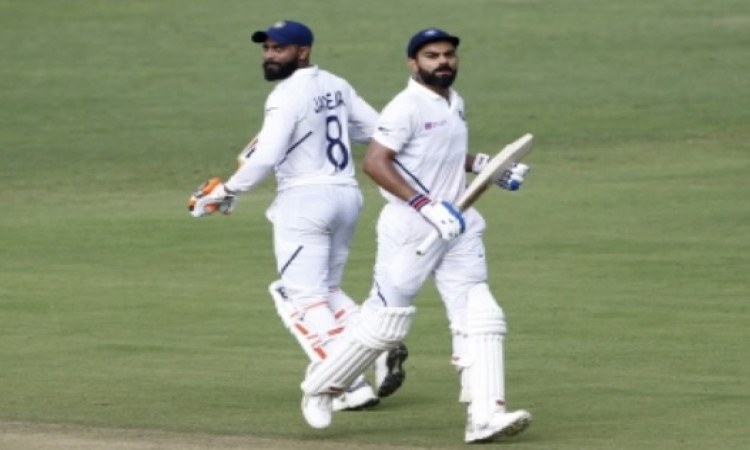 Kohli scored a record seventh double century and shared 225 runs for the fifth wicket with Jadeja, which came off just 237 balls, helping India post an imposing 601/5 before declaring on Day 2. At stumps, South Africa were reeling at 36/3.

"It's not just the amount of runs, but the pace in which they have come that made a huge difference. It has given the team an extra session and a half which becomes very crucial," Mayank said in a press conference after the day's play.

Mayank scored 108 in the first innings -- his second century in as many Tests in the series -- as India declared on 601/5 on Day 2. Kohli was unbeaten on 254 off 336 balls, his innings laced with a whopping 33 fours and two sixes, while Jadeja scored 91 off 104 balls with the help of eight fours and two sixes.

"It was almost a run-a-ball 225-run stand, which is fabulous. If you are looking to win games, you want to have the time to pick up 20 wickets," Mayank said.

Terming Kohli's knock as 'top class', Mayank said, "It's no joke and the way he is batting is tremendous. The positivity and intent he gets is fabulous."

The 28-year-old Karnataka batsman also said that the fact that India have bowlers who are consistently able to take 20 wickets in a match gives the hosts an edge.

"The way our bowlers are bowling, its tremendous. We are testing them, we are asking them those tough questions. Having 600 on board gives us that much more time and the leverage to keep attacking fields and keep putting pressure on them," he said