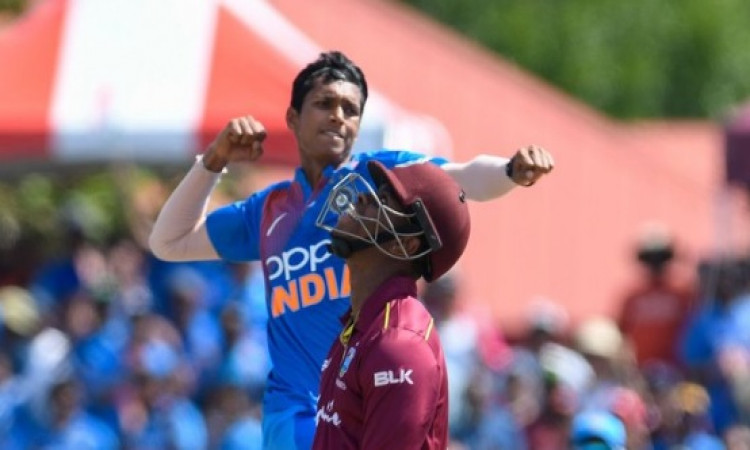 Lauderhill (Florida), Aug 4. The Virat Kohli-led Team India will aim to clinch the three-match T20I rubber series against the West Indies when they face-off in the second contest at the Central Broward Regional Park Stadium Turf Ground here on Sunday.

In the series opener on Saturday, India defeated the West Indies by four wickets to take a 1-0 lead. The Indian bowlers came all gun blazing to restrict their opposition at a paltry 95 runs after Kohli decided to bowl first.

Debutant right-arm pacer Navdeep Saini was the pick of the Indian bowlers as he claimed three wickets conceding just 17 runs. The 26-year-old pacer will aim to replicate the show on Sunday and cement his place in the side.

The Indians were also helped by some poor shot selection by the Windies batsmen.

Chasing 96, India made a heavy weather of the small target before overhauling it 17.2 overs. Opener Rohit Sharma was the top scorer for India with his 24 runs while Kohli and Manish Pandey contributed with 19 runs each. While the bowlers were decent, the batsmen struggled with the bat as the wicket was not easy to bat on.

They would, however, try to improve in Sunday's clash.

For the West Indies, Kieron Pollard was the only one who showed a fight with the bat with his 49 runs -- the top-scorer. The right-hander missed out on a well deserved fifty after being dismissed in the last over of the innings. As all the other Windies batsmen failed on Saturday, they would certainly be looking for a decent show as another loss will see India clinching the series.

In their bowling, Sunil Narine had picked the crucial wickets of Rohit Sharma and Rishabh Pant in consecutive deliveries and conceded just 14 runs in his quota of four overs.

While India won't try to make any changes in their playing eleven and would stick to the winning combination, West Indies could include an extra spinner in Rovman Powell as the wicket might again be on the slower side.